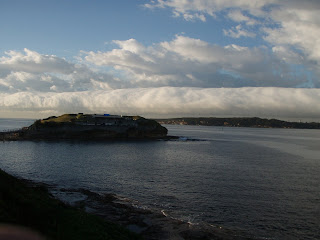 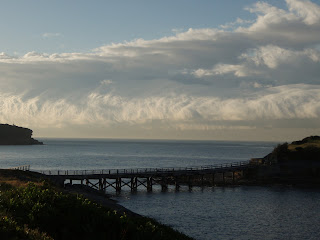 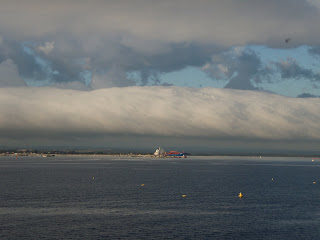 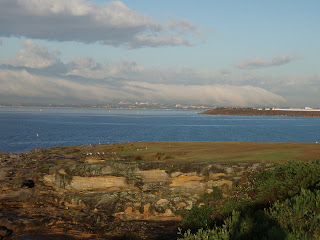 Spent the weekend at Port Macquarie catching up with Chris and his familiy. Chris, in large part, is responsible for getting me into riding many years ago. Highlight for me was an 80 km "spin" which involved climbing the brutal "North Brother" at the 1/2 way point. Chris mentioned that it was 5 km at 10% - i thought he must be kidding - but that's literally what it turned out to be, from sea level to 480m on a dead track with the pitch barely deviating. I went pretty hard at the start to keep the young whipper-snapper Cain in check, but this resulted in us both blowing and I had to fight really hard just to turn the cranks on some ramps (starting to think compact for europe next year). The consistent grade reminds me of the stiff middle section of Luz Ardiden. This now probably rates as the hardest "big" climb I know of in Oz, with Buffalo (18 km but shallower) coming in second. Topped out in 22:30. The hillclimb record stands at approx 17:30, set earlier this year, where my time would have gained me 5th. Incidently, local mtber and world 24 solo champ Jason English came second in the hillclimb with ~18:00. So that's the difference in engine quality i'll be up against again next year. 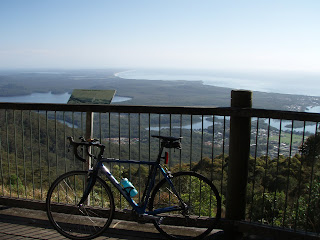 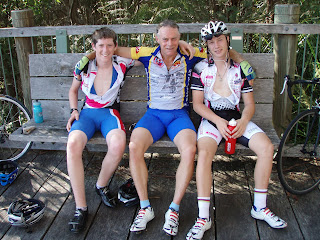 Chris and his two young chargers - Ryan and Cain 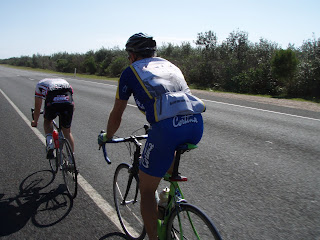 Chasing Cain and Chris on the long drags home 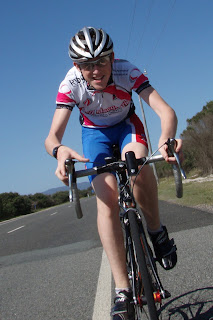 in this months local mtb rag 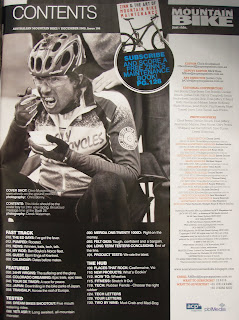 …but different. Not bikes but birds this time. Just participated in my first 24 hour "twitchathon". In this race of extreme birdwatching the team recording the largest number of species in 24 hours wins. And although the race "finishes" at 4 pm on the Sunday at any of a number of designated spots, the start at 4 pm Saturday and the intervening time can be spent anywhere.

I've always been interested in birds, but would have only classed myself as a casual observer, as apposed to a serious birder. But perhaps this event changes things a little. Having heard what I was up to, Tim (in disbelief) reckons I'm the most competitive bloke he's ever met. That I seriously doubt (coming from a CEO with some A-grade heavies on the board of directors), although if I'm interested in something I do like a good challenge. Our team (myself, Rob and Andrew from work, and Ed) decided to start out near Coonabarabran. Hence, the marathon really started on Friday night, as we crammed into the langles-mobile and headed up the New England Highway, staying in Scone overnight. [actually, if you include the fact that various members of the team had been out scouting regions on weekends leading up to the Twitch (Anita and I made a trip to Hexham Swamp, near Newcastle), it's more than just a "casual" single weekend event]. The next morning we were in the car by 8, direction Quirindi, where we stopped at a bakery for breakfast, before scouting the first of many locations that we would come back to later that afternoon when the race was under way. Got a good look at many of the dry country birds in the process, many of which I hadn't properly laid eyes upon before ("lifers", in twitching terminology. At Breezer, we even spied a "Little Curlew" which we subsequently discovered had not been recorded in NSW for 5 years. Unfortunately, this fellow, along with a yellow-billed Spoonbill (that we also failed to get later in the event), where absent upon our return that afternoon, so didn't count. The Curlew would have been a shoe-in for the "rarest-bird" prize.

With barely time for lunch the hours whittled down till we had to head to where we intended to start in the Pilliga scrub. However, a fuel miscalculating resulted in a diversion to Coonabarabran to make sure we wouldn't get stranded anywhere. This domino'd into a belated arrival at a pair of locked gates preventing our reaching the desired start point. Without time to look for an alternative site, when 4 pm clicked by, this is where the Twitch commenced. Not the ideal start, but we were under way none-the less, but the additional walking we had to do to reach interesting (and un-scouted) habitat would cost us later on. After about 45 min and with ~30 species in the bag we were back in the car bumping along the dusty road back to the Oxley Highway, screeching to a halt whenever someone spotted something warranting further investigation. This juggling act of frenzied driving with intermittent stopping was modus operandi as we worked our way back towards Breeza, and Quipolly Dam east of Quirindi - we had to be there before dark! We got there….just as the sun disappeared, and although we got most of the waterbirds we were after (some by silhouette), we really could have used another 30-45 min to get many of the forest birds which were essentially shutting up shop as we arrived. This late arrival was nearly a monumental stuff up.

With the sun long gone we spot-lighted the road for another 45 min or so before piling back into the car (with the count at 90) and making the long, and then serpentine dirt road drive to the Allyn river campsite in the guts of Barrington tops National Park. We arrived at around midnight, but then spent the next couple of hours spot-lighting and listening - desperate to pick up a few owls (eventually got a Boobook owl and an Owlet-Nightjar). As we hit the sack next to the car at ~ 3am, the count was 92 species.

The next morning (~2 and 1/2 hours later) rates as the most spectacular dawn chorus I've ever heard. A wild cancophany of tweets, woops, hoots and many mysterious calls. Easy to hear, hard to see. By 7:30, having got a good swag of the rainforest species we weren't going to get any where else, we were back in the car and re-negotiating the winding dirt road en route to more forest, wetlands, and even the ocean, to get the seabirds. Mid-morning the tally was only ~125, and I was starting to doubt that we'd get the 170-180 we were hoping for.

With only hours to go we were still scratching to get many of the birds we take for granted in Sydney. We only got the Rainbow Lorikeet, Spotted Turtle-Dove and Red Wattle-birds in the last hour, and unbelievably, dipped out entirely on species such as the Grey Butcherbird, Little-wattlebird, New Holland Honeyeater, Koel, and Channel-billed Cuckoo -all of which now taunt me on my commute to work each day.

The end came (ie 4pm) and we congregated with the other teams finishing at the Wetlands Centre in Newcastle. Everyone, including us, looking pretty exhausted from the experience. We ended up with a count of 173 (and ~700 km diving), placing us (The Plain Wanderers) in 13th position (as per my last 24). About 50 species were new to me - i'm sure i'll not manage such a jump in my Australian list again. My 3 favourite observations were the Double-barred Finch at Stockton Sandspit, the male Mistletoe bird in the Pilliga, and the White-fronted Chats at Hexham swamp). We were pretty satisfied with 173, given it was our first attempt, although we were humbled by the winners (The Menacing Monarchs), who bettered their 2nd placing of last year to finally win the Twitch with 247 (another record). It was a great, albeit exhausting experience, but we all reckon we've got at least one more in us, and plan to be back next year to see if we can tick a double ton. 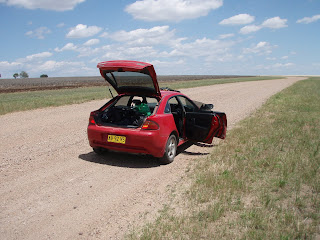 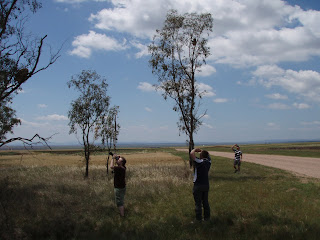 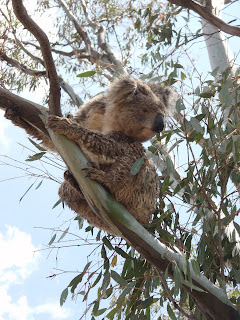 Most bizzare tick - though not of the feathered kind. North west of Quirindi, in the middle of wheat plains is a stand of literally 10 scrawny gums - inhabited by two Koalas!
Posted by langles at Monday, November 09, 2009 No comments:

I just recieved a couple of emails officially confirming that I have (unwittingly) qualified for the 24 hr solo championships OF THE WORLD (spoken Jeremy Clarkson style) to be held at Mt Stromlo in Oct 2010. This eventuates if you cover at least 75% the distance of the winner at one of various qualification races, the Scott being first for the 2010 worlds. Crikey! Can hardly decline participating given it's effectively in my own back yard (first time in Oz), even if i'm only making up the numbers. Ben alerted me to another qualification race in Feb about which i have politely declined interest. His reply; 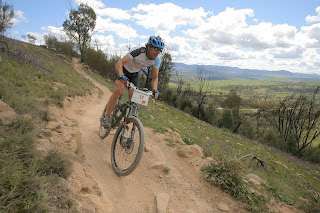