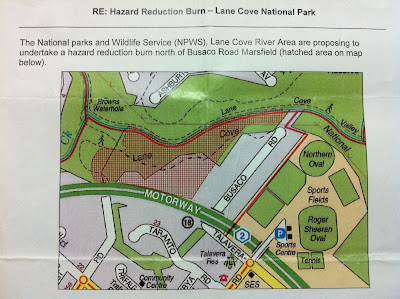 It seems my backyard is destined for termination at the hands of the authorities in the name of a control burn, which i'm opposed to on several levels.  Having made a few calls it seems there is little i can do to stop the tide. The 0.6 km track between my house and the Browns Waterhole track is my local patch, dominated in the middle with a lovely section of sandstone heath, bookended by angophora-peppered taller forest, and fringed at the river and suburbia by weed infested junk that i wouldn't mind seeing gone, although this stuff tends not to burn so well. In the event that my house, field guides and notes etc go up in smoke, along with the above-mentioned habitat, here below, for all posterity, is my list of species i've observed in this bush and directly adjacent suburbia since i started taking note about 5 years ago (72 species in toto). T'will be interesting to see which species come back, and how long it takes. In no particular order;