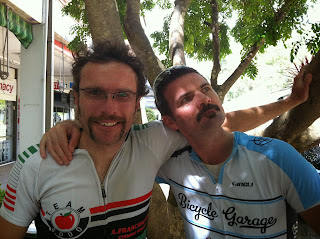 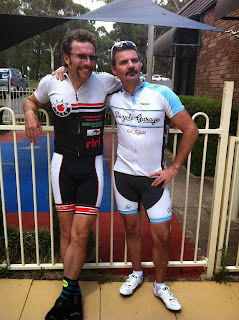 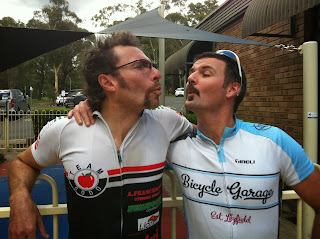 Posted by langles at Tuesday, December 17, 2013 No comments:

Actor Samuel Johnson is a charismatic man on a mission; to raise as much money as possible for breast cancer research, in support of his sister who was diagnosed with the terminal variety 2 years ago.  The way in which he is doing it is somewhat unique – to break the world record for the longest journey travelled on a unicycle.  He has about 12000 km under the belt at present, and another ~4000 to go.  He started in Melbourne in Feb of this year, crossing into South Australia, then north to Darwin via the endless corrugations of the Oodanadatta track (which the mudge and I drove last year and dreaded the thought of cycling), before traversing west to Broome, then down to Perth.  Then from Brisbane south to Sydney, where he dropped in this morning for tea at the Garvan (aka work), and to whom proceeds (already 1.1 mil) will be donated.  Tassie and the Nullabor await!  Quite a feat!  I once had a unicycle but could barely traverse the back yard without being spat.  Already Samuel must have a bevy of amazing stories to tell.  I’m hoping a book will follow.

The bike.  29 inches is so 2 wheels.  A single 36 inch wheel does the trick, whereby almost 3m is covered by a single revolution.   Running 60 psi on the tarmac and a bit less on the rough stuff.  He is already onto the 15th inner tube, second tyre, second set of flat peddles, and about the 5th hub, which is now custom built and over-engineered to prevent the flanges from cracking (he cracked a few on the Ood, as well as the frame itself)  He rotates between 3 different saddles to prevent things getting too uncomfortable.  A disc rotor brake keeps things sane on the downs.

Don’t know if he was just donning his actors face but he seems to be really enjoying it – I’m guessing both the extended periods of solitude interrupted by crazy moments, such as the reception he got this morning, mixed in with the satisfaction of prevailing for the greater purpose.  It was truly inspiring to see him roll up to the entrance, skillfully ease through the front door and weave through the crowded lower level to the presentation area amidst raucous applause.  It’s already one hell of a journey and I wish him safe travels and good luck for the remainder.

Check out “www.loveyoursister.org”, if you want to know more or throw a few clams in his direction. 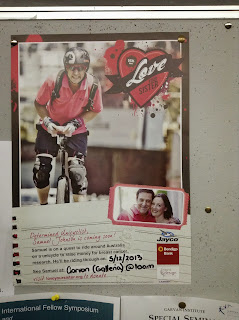 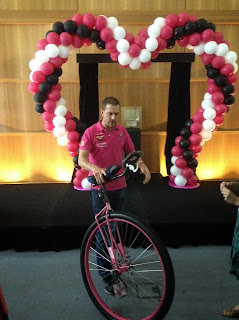 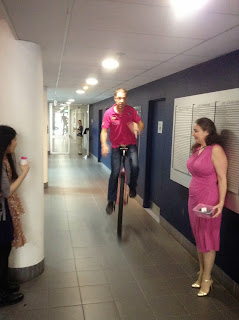 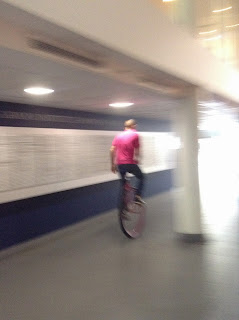 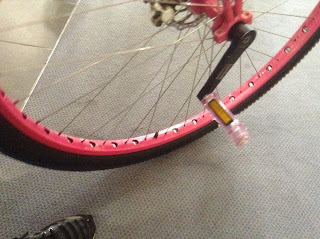 Posted by langles at Thursday, December 05, 2013 No comments: