Winter in Sydney is rolling on. Everyone has been complaining about how cold it is this year, but from my perspective, residing at “the outpost”, I’ve seen very little of the frosts and certainly none of the frozen bird baths of last year. With the arrival of my new old car, Dad and I opted to drive the former old one up to my sister’s place, just south of the Gold Coast, where it will serve out its days. It was good to see my sister again, and become acquainted with my little nephew and niece, Jackson and Jessica.

Alas, whilst the last post waxed lyrical about how well things have been going science-wise – it’s been nothing but the opposite side of the spectrum since. That’s science for you. Lots of bad/unusable data, and the paper we had high hopes for got bounced not once, but three times, so its ended up submitted in a journal (JMB) where we normally publish, although I’m sure it will cite way above the journal’s weight once it eventually comes out. I’m currently putting a poster together for the IUCR conference which starts in Osaka on the weekend. It will be my first time in Japan, so I’m looking forward to experiencing new sights, tastes and sounds. And a few of us are very keen to climb Mt Fuji (~3700 m) before returning home. Fingers crossed with the weather there.

Have managed a little climbing, although it really is cold in the blueys of late, but the recent highlight was probably a day walk to the blue gum forest and back, in the Grose Valley, near Blackheath. I hadn’t been down there since a mega fire ripped through it a few years ago. It was nice to see that the bulk of the forest was untouched, and it was great to once again feel like ants beneath that huge canopy. We were less than impressed however, to discover that the NPWS has blocked the road to Perry’s Lookdown for some reason, so if you are keen to do it prepare yourself for a 2.5 km trudge to get to the top of the stairs (and again on the return trip). Ah yes, the stairs, as expected gave the old legs a hammering. It took Anita and I about 45 min to do the descent, during which both of us had the jelly-leg wobbles by about ½ way – makes Dave Gells plummet of ~12 min very impressive. After cruising around the bottom for a few hours (and yes, the Dunny at Acacia flat is still full), it took about 48 min to get back up the stairs and into the snow/sleet and rain that had been periodically falling all afternoon on the plateau….and then we had to trudge back to car into a glacial wind. Needless to say we ended up thawing for quite some time in front of the fire at The Gardeners Inn.

And yes, the Olympics have been happening as well, although after the awesome finale to the road race on day 1, everything else has been a bit of an anticlimax. The whole team rode a pretty good race, but Cancellara had the ride of the day. Haven’t the Poms been absolutely awesome on the track too – something I’ve not witnessed before. Coupled with The Cav’s ride at Le Tour, it seems that the Brits are going through a bit of a cycling renaissance.

Commuting at this time of year is always hard, particularly riding home in the cold and dark, but after I return from Osaka, I’ve got about 6 weeks to ready myself for the 24 hr, which I’m aiming to do with Lawrence and Ben this year. This will require some preparation as I’m creeping at the moment. I’ve just purchased my first set of tubeless wheels, so I’ll let you know how these go in due course. 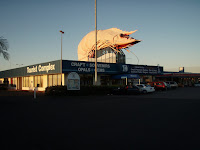 My first encounter with the big prawn, Ballina 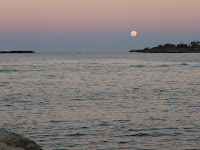 Moonrise over the ocean at Ballina 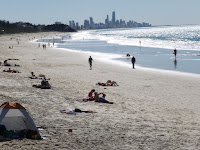 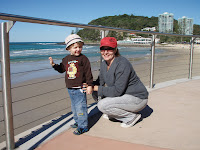 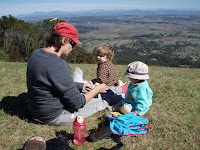 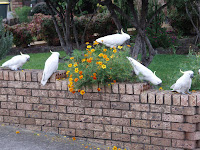 Totally unrelated - Cockies up to mischief on my commute 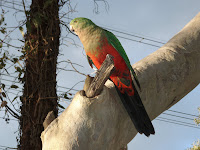 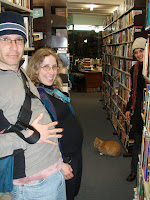 Heidi and I compare guts 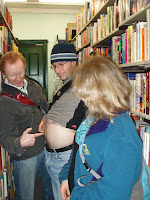 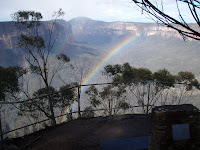 At the top of Perry's Lookdown 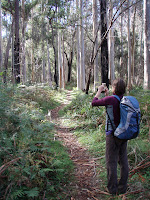 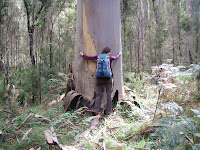 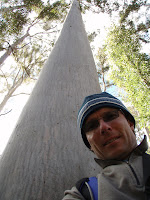 These things are huge 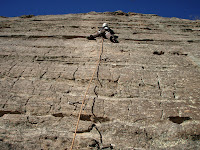 Anita catching the last rays of the sun on a grade 17 at Mt York.
Posted by langles at Tuesday, August 19, 2008 No comments: