It was bound to happen – the combination of bikes on roofs and underground parking met at an inevitable (perhaps) convergence.  We’ve been so good all these years…until just recently, when the R5 was put to an early grave, with just shy of 30000 km on the dash.  Ironically only weeks before I’d replaced all the bearings in the wheels and swapped out the press-fit bottom bracket.  Upon hearing the crunch the Mudge and I turned to face each other, and simultaneously exclaimed, “bike!” The force of the impact was sufficient to push the saddle rails through the top of the saddle (the point of impact), and the claw punctured the down tube.  Lucky there was just one bike up there and not three, or we might have pulled the roof off the car as well.

Remarkably, the “transportables” component of my house-and-contents insurance coughed up exactly what I paid for it.  However, life is too short to ride the same thing over and over, not to mention the price of a new R5 frameset being astronomical, so I’ve opted for something a little different, and considerably cheaper, although am sticking with the charcoal/red colour scheme which I’m (surprisingly) enjoying.  So, until Mr Canyon arrives I’m back on the olde Wombat and 10 spd technology.  Might even have time to get the odometer up to 50K before finally putting this one to rest. 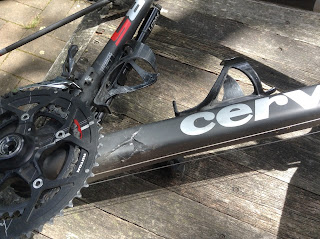 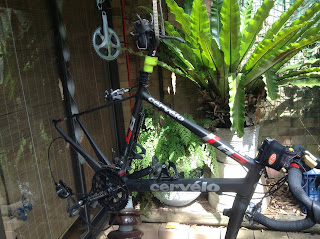 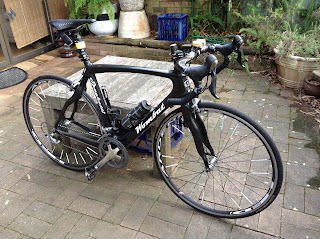 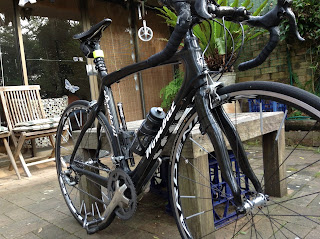 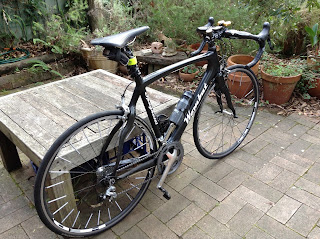