The events that unfolded on Saturday morning could not really have been scripted. I was slated to climb on Sunday, so Saturday was my chance to touch base with Gerard and BTi, with whom I hadn’t ridden for a while. On the menu was "3 valleys" with a 7:30 am M2 rendezvous. GK arrived at 7:05, cheery eyed and super keen – in contrast to my still-weary state as I readied myself to go. We were out the door on time, but only made it about 250m down the street before I heard an awful crunch behind me. GK had attempted to tweak the speedo sensor on his front fork, which was clipping the flea, whilst rolling. Somehow his right hand got sucked into the front wheel and jambed against the forks, locking its rotation and flipping himself and the rig such that he landed heavily on his head and shoulder. I feared the worst as he lay immobile, clinging to his RH side. After he settled from the shock it transpired that nothing appeared to be broken – besides one of the spokes in his front wheel and (brand new) helmet, although he had collected a heavy graze on his shoulder, as well as some pretty bloodied knuckles, not to mention bruised pride. Could have been a lot worse....goes to show how important helmets are. BT rolled down to help pick up the pieces. We strolled back to the house for a sit down and a cup of tea, and eventually couldn’t help but have a bit of a laugh about the stupidity of it all. With GK departing by car, BT and I decided we would still go for a spin...after all we were there, clothed and ready. However, with BT suffering from a bit of flu we decided we would simply head off for a burnt coffee (Bobbin Head Road) in lieu of the 3 valleys.

Upon approaching the café BT suggested we should at least do one valley – descend Bobbin Head and climb back up to the café. If only it had been that simple. Somehow on the way down, BT managed to overcook “cervelo corner” and had a “truly awful” crash, as described by the motorist in the 4WD who was coming in the opposite direction and who phoned the ambulance and helped direct traffic. BT was not in a good state, although he never managed to lose consciousness. Blood was streaming out of his helmet to the extent that I was initially reluctant to take it off. As well as collecting sizable grazes on his right side and shoulder, he had a nasty gash above and behind his right eye that would likely require stitches – probably the result of his bandly mangled shades being pressed into his skull! There was also some question as to whether he had broken his right collarbone as we loaded him into the ambulance. After the ambulance whisked him away, and I thanked the motorists who had given assistance, I stashed BT’s bike in the bushes (yes, the bike is OK!), rode home, showered, drove back to pick up the bike, then to Royal North Shore hospital where I found him relatively cheery and awaiting a second X-ray and 7 stitches. I imagine he will be sore for a few days to come, but the good news is that the shoulder is not broken, and he should be spinning the wheels again soon. The helmet really saved his bacon!

Fortunately for us the diver of the 4WD had been in a similar situation (as a driver) some years earlier, in which several cyclists missing a corner ended up over his bonnet! So this time, we he saw BT approach to said he knew what to do and applied the brakes well before BT had come off (BT lay a few meters short of the bumper bar). He also described the rear wheel swinging out to the side before BT high-tailed it (Beloki-style), which might provide some explanation as to what happened. Indeed, shortly after the crash the inner tube of the rear wheel exploded like a gun-shot. About a foot of outer tube was off the rim, preventing rear-wheel rotation. It is possible that displacement of the outer tube on the apex of the corner locked the rear wheel, causing the drift noticed by the motorist (Kristy once rolled an outer off a rim on a corner in a race. In BT's case the outer was all too easily stretched back on without tools). I was too far behind to really see what happened but I initially thought it odd that the rear wheel would have drifted out. When I crashed on the same corner a few years ago (on a Cervelo) it was the front that slipped from under me, although the road that day was wet. Then again, the tire might have rolled in response to the impact and not before?? Regardless, it’s a nasty corner which tightens, and has claimed many a cyclist in the past, including myself and Lawrence, and will no doubt claim more in the future.

Fortunately, that is the end of the grim news from this end. Hope no such incidents have befallen you northern hemisphere chaps! 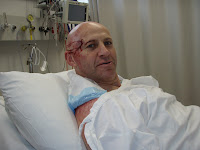