The tyre that kept on giving...

...has finally come to an end. I bought a Sepcialized "Armadillo" (wire bead) earlier in the year out of desperation in the absence of being able to find my favoured Conti Gatorskins at a shop in the blue mtns (approx $50). The side walls are so thick the guy at the shop recommended I only run at 90 psi. Lots of time (and no punctures) passed. When the thin red line started to show a few weeks back the lads cheekily suggested i'd get another 1000 out of them. Well, they were right, although it is now a fat red line and large sections of casing revealed themselves on the weekend. Still managed to get round 3 valleys on the last hurrah. > 7000 km old - a rear tyre record for me (I usually get ~4K out of the Gators). Hardly high performance, but perhaps the go if the powers that be decide to re-seal any more of the 3peaks or Bobbo circuits. 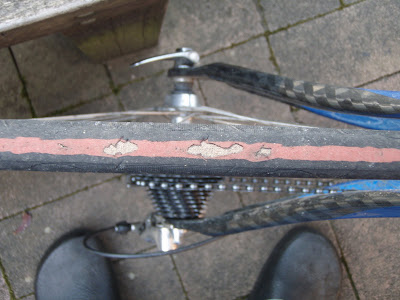 Posted by langles at Monday, September 27, 2010 No comments:

Managed to ride myself through the cold and even get some mtb riding in. A few weeks back had a good afternoon with Aaron at Appin, where I clocked a 34 min lap – a few min quicker than my previous best efforts on the ~10 km XC circuit. Also went to the mighty Ourimbah track for the first time with the Salmon collective. Wow, what a circuit! Sort of like a mix of Stromlo and Sparrow Hill – flowing single track with assorted brutal bits thrown in, and more undulating and varied than the Appin circuit, although with fewer pure roll-offs. Whilst Appin is almost exclusively flattish sandstone base, Ourimbah has a good mix of jungle (Jurassic Park sector), as well as lots of more open forest with a bit more climbing. We also had a play on the more serious downhill course (don't think I'll be repeating too much of that on the Anthem), and discovered a secluded pump track near the "Graveyard" sector which is loads of fun. Be warned, some of the A-lines on the XC course – well, one in particular – should be carefully considered/inspected first. Finally managed to commit but it shakes your nerve in a Mulga-Bill's Bicycle kind of way! Not sure I'll be lining up to do that one too frequently (head angle on the Anthem a little steep and..…..and of course I'm a bit too wussy for this sort of caper). But don't be deterred. Ourimbah is great!

Only three weeks to kill now. Started my taper last week with only a 300 km week (first less than 400 in some time), and even managed to have the whole weekend off the rig – although failed to complement this with a weekend off the turps thanks to a friend's wedding up at Ballina. Just counting them down now and anxious to get the whole shebang under way. 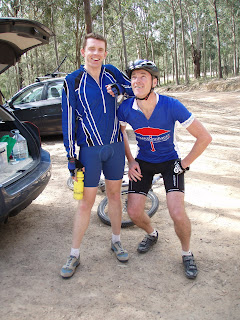 Mike and Ben hamming it up 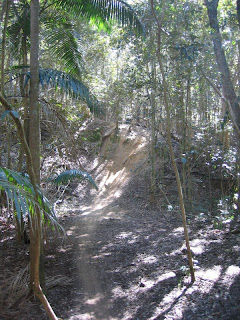 The monster roll-off in question (above...older image before the duckboard was installed...about a 20 foot drop), with a random rider for scale (below). I ended up "aiming" for the duckboard but managed to miss it all together. Body armour probably a good idea. 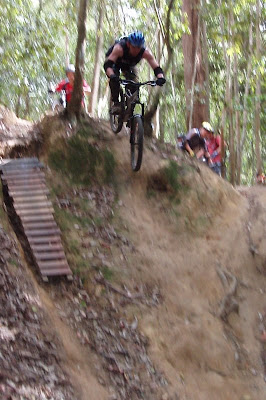 Posted by langles at Tuesday, September 21, 2010 No comments: