It’s been a while since my last post, during which I’ve been up to lots of things and nothing. In the riding department there have been numerous outings on several fronts. Ben and I checked out the technical mtb wonderland which is Red Hill, on the escarpment just south of the Narrabeen lakes. We discovered some absolutely terrifying drop-offs, which are obviously frequently ridden, as evidenced by the dirt smudges on the edges and landings. Not keen to become statistics, we limited our activity to the more sedate features. We also discovered some of the most amazing cement-like mud I’ve had to extract myself from.

All this riding got Anita interested to the point of actually giving it a go. On her first foray in the Royal National Park, she proclaimed it was the best fun she’d ever had on a bicycle only minutes before falling off on a tricksy descent and breaking her finger. She was even less amused at the prognosis – 2-3 months off climbing. This was going to test the relationship – as she is not the type who enjoys sitting idle.

So, in the absence of being able to climb or cycle, walking was one obvious avenue for release. We picked a weekend and aimed to do the Mt Solitary circuit over two days. Despite a lousy forecast, we set off on what turned out to be a lovely Saturday afternoon. We left the car at the top of the golden stairs on the Narrowneck peninsular, and headed off in the direction of the ruined castle, which we ended up just skirting as we had left a little late in the day. The climb up the ridge onto Mt Solitary was as enjoyable as I remembered, with fantastic views back across to the walls below Katoomba on one side, and more Narrowneck wilderness in the Kanangra direction. On top we decided to push on towards the middle of the massif, however, due to a navigational mishap by yours truly we ended up camping at Chinamans gully. The following day was a bit of a shocker, in the sense that the bureau of meteorology got the forecast spot on – rain and drizzle for the entire day (emphasis on entire!). I made the typical langles mistake of thinking I would just laugh at the cold (sans raincoat), preferring to walk wet than steam inside plastic all day – which was fine up to the point of about 10 hours later when the cold finally got to me as we trudged along the road towards the old abandoned hospital on the Kings Tableland. Fortunately, the taxi ride was only a phone call away, and having picked up the car we defrosted in the pub at Wentworth falls over a hot meal.

Other news includes the fact that as well as going the way of the mobile phone, I have also acquired my very own motor vehicle – a second hand mazda 323, which I’m embarrassed to say I’ve become very attached to – manual shifting and all. Just goes to show how hypocritical and easily corruptible an anti-technology motor-vehicle-phobe can be.

Work work work. That is the other thing that’s been consuming considerable time lately, but not entirely without payoff. My rather lean publication record has recently been swelled by the addition of several long-time-coming first author papers. Additionally, another paper aimed at the more prestigious Molecular Cell has recently been submitted on the back of a structure I was also instrumental in solving, and there is likely to be at least one other come the end of the year – my best year to date as far as publications are concerned. Maybe I’ll survive in the science game for a little while yet.

Sporting-wise, whilst I haven’t been up to much myself, I’ve been totally engrossed in two particular endeavors of late. The first involves the battle between two sets of climbers to bag the record for the speed ascent of The Nose route on El Capitan in Yosemite – a climb of approx 900 m (31 pitches, 5:10, A2), and first sieged by a cast of thousands back in the 60’s over some 45 days, but now tackled routinely by the elite in less than a days work! Hans Florine and Yugi Harayama have owned the record for much of the last 20 years, the most recent incarnation of which stood at 2 hr 48 min, until the rock'n roll Huber brothers knocked 3 min off it late last year. They made a film about their attempt to break it (“to the limit”), which is worth catching if you can find it showing. Not to be outdone, Hans and Yugi returned to the valley and over a period of about 3 weeks made numerous attempts to re-gain the record. I found myself captivated by the (almost daily) reports on various attempts etc. There is a huge amount of video footage to be found on the web if you’re interested. On their last shot before Yugi was to return to Japan, they finally shaved another 1 ½ minutes off it. It now stands at 2:43:33. I now await the return of the Hubers for the inevitable raising of the bar.

And of course there is Le Tour, which has been funking with my sleep for over a week now. Cadel has finally realised a dream and nabbed yellow. Go Cadel!!! 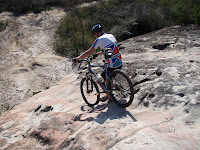 Another mega drop-off Ben and I wisely stay clear of. 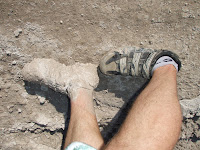 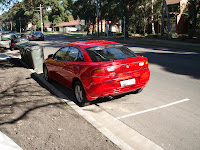 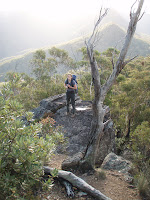 on the ridge up to Mt Solitary 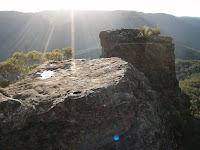 nice views on the day when we had them 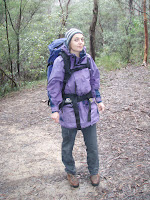 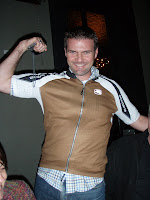 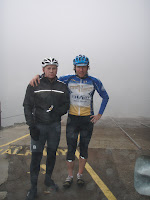 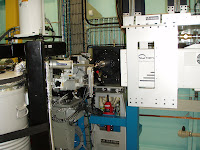 the protein crystallography beamline at the Australian Synchrotron 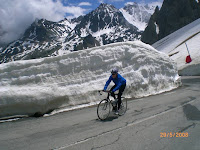 Kev near the top of the Tourmalet a few months ago, which the tour passed over last night.
Super shot Kev!
Posted by langles at Tuesday, July 15, 2008 No comments: