With Dirtworks looming I thought it high time to get in some mtb practice in the form of a couple of Saturdays on trails of the lower blue mountains. The first outing aimed for the Oaks trail, by first riding up the highway. I managed to rope in a couple from work (John and Frances), Ben from climbing, and even Gerard with a brand spanker (Specialzed Epic), whom we were to meet at Woodford. As is often the case with these mtb capers, there were a few stops, starts and issues along the way. Before we even started we had to swap two sets of slicks for two sets of knobblies for John and Frances. En route up the highway, Ben punctured on a bottle thoughtfully dispatched by a motorist. We all ran over the debris - it was perhaps inevitable that one of us should be claimed. This was the first of many punctures for Ben on the day – not surprising given the thinness of his rear tyre which was losing teeth. The same wheel broke a handful of spokes before the day was out. Upon meeting Gerard we learnt that the rear “brain” suspension on the epic was already bleeding oil on its inaugural ride – and we hadn’t even hit the rough stuff yet. The result - fully active "pogo" suspension all the time. Most of us had some kind on incident coming down the trail – including myself, due to the sheer stupidity of trying repeatedly to master the mono clipped in, only to flip the thing and land square on my back, although John, who witnessed it from directly behind thought it an excellent trick but not one he wanted to emulate.

I should add that this was the first “mobile” outing for the inevitable acquisition the langles mobile (thanks to BT, Gerard and the jibes from a cast of thousands) – hence the modification of the blog banner. Somehow landing on my back failed to crush this new extravagance.

The following weekend Ben and I were keen for the Andersons/Oaks double, again making a loop of it by riding up the highway from Glenbrook to Wentworth Falls, where we met Tony who was only keen for the downhill bit. Despite threatening rain all day, we managed to escape any serious dousings, but we weren’t able to escape the usual array of mechanicals. These started early (km 12) with Ben cracking a front hub bearing such that the front wheel virtually seized. A bit of manipulation and luck resulted in the wheel turning normally again, but not before some serious concern about how we were going to get the thing back to the car, let alone fixed. We gambled on continuing, and as it turned out the wheel gave no more trouble for the rest of the day. His rear wheel, shod with a new tire and with some new spokes (damaged last week), gave no further trouble, although after the first big descent of the day he flipped his brake pad to the correct orientation! Tony on the other hand ended up with all the punctures, not to mention taking the odd spill on some of the descents, although fortunately didn't break anything or lose lose too much claret for his efforts. The killer climb back to Woodford was not quite as dreadful as I remember, probably due to it being a lovely 18-20 C, as opposed to bloody hot when I’ve done it previously. Not feeling too bad, I had two cracks at it. The first involved 4 stops, and the second only 3. The second time round I got the bottom half clean – something I hadn’t managed before, so perhaps my bike handling skills are improving. On a good day I reckon I’ll crack the whole thing clean (he says now!).

Having negotiated Andersons, the Oaks trail finish now seemed pretty tame. It was very satisfying to be knocking off both in the same day (a 90 km round trip). Having got through the technical part of the Oaks, Ben (who was on a schedule) and I bid Tony good luck and pushed ahead, giving the single track some stick before wallowing up the final climb back to the car. Riding too and from the Concord oval rendezvous (where I met Ben, and where he dropped me off) made it probably the longest day I’ve ever had on an mtb (120 km), although about ½ of this was on the hard black stuff. Now, one more weekend to go before Dirtworks proper. I just hope we get some dry weather – the monotonous weeks of rain are making training difficult. 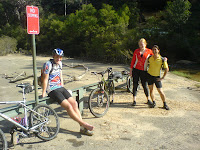 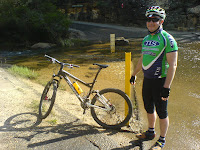 Rare sighting of Gerard with mtb 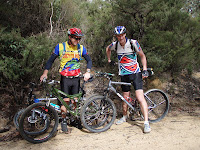 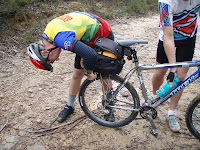 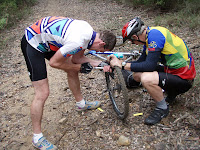 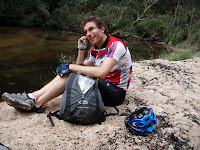 I am now connected - damn! 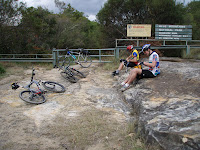 top of the Oaks trail 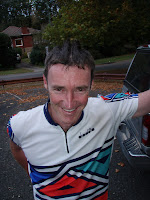