Well - the whole replacement frame thing has become a bit farcical. I received frame V2.2, rolled around on it for a few days before taking the wheel off (as advised - allowing the glue time to mature) only to have the metal sleeve come straight off its carbon housing when the wheel was eventually removed - so much for gluing it back on. The disgruntled fellow at the shop conceded this might mean another new frame. Still waiting to pick V3.1 up - or should that be V2.1b? Hence, the weekend valley ride, as well as commuting (creeping) this week has been aboard the mtb. There has been an upside and a downside to this. The upside is that it has allowed me to fine-tune my position on the Stumpy. In mtb events past I have always succumbed at some point to a sore lower back, an unpleasant experience I have never experienced on numerous road bikes before. I had noted that relief was found in locking out the rear shock (defeating it's purpose), or by gradually raising the saddle, raising it some more and more and so on - to the point where I can barely tickle the ground with an extended toe when unclipped. But that is what I've had to do to assume a relatively similar position to the roadie, on account of the much higher bottom bracket. The result - no more lower back pain - all so obvious now that I've figured it out. That was the upside. The downside is that in a moment of brashness and stupidity - convinced of my newfound physical invincibility - I have entered the Scott24 (mid Oct), in the category specially reserved for those with no friends. Bart's immediate chortle, "solo, you nut!" I know deep down that the reality will certainly be of character-building proportions. Anyway, as my otherwise trusty 24hr henchman Lawrence will be changing nappies, and Ben is out through injury, it's now or never, and might cure me of ever wanting to participate in such a God-awful category again. Kind of like doing the Grafton-Inverell (228 km road race), although it took 2 attempts to cure me of ever wanting to do that one again.
Posted by langles at Thursday, July 30, 2009 3 comments:

Picked up the new frame. Totally diff design to the old one - more conventional straighter and narrower tubes, with shorter/thinner head tube, hence more spacers leading to the bars. Lighter too. Approx 8.5 with pedals and wheels - not bad for $A2.3K. Bit odd meshing the new frame (thin) with the old fork (fat), but not too bad on the eye. So far so good.

Unfortunately, my rear wheel really is a bit clapped out, although it has probably clocked 40-50K kms. Stripped the rear wheel down - a little bit of pitting on one of the cones, so decided to repack and put back together. Problem is, just can't get the right tension - cone bolts burred etc - so decided to leave that for another weekend. Put the floppsy American Classics back on (with new spokes replacing those that were broken). And again with additional spacer to stop the cluster cogs rattling. This is where the problem was encountered. Tight fit getting the rear wheel in - in part (hindsight) as the rear derailleur was loose!...because the hanger was loose! Shoddy mechanics at Cell - as well as the hanger being loose, the front derailleur was set almost 1 cm too high on the seat tube, and the new cables (which I'd requested) were a mess at the front. I've decided that if you want quality work done on your bike, you've got to either do it yourself, or take it to a shop with mechanics who look hungry (that is, ride, a lot).

Back to the problem - rear wheel just won't quite fit - a bit of force and it goes in - but the slither of metal visible near the 11 was not a good sign. Upon removal, discovered that the slither of inset metal lining the drive-side rear dropout had been caught by the wheel and partially peeled away, making the frame useless. Scheise! And I haven't even ridden the bloody thing yet. Suddenly, I see the logic in paying more dollars for a higher quality carbon rig. This dropout design is poor, as even slight burring of the contact surfaces exposes the inlaid metal liner, which can then be caught as the wheel goes in - a good case for a solid Al dropout IMO. Probably wouldn't have even happened if the derailleur hanger had been rigidly attached to firmly guide the wheel. Grrrrrrr. So, took it back to the shop, fully expecting the possibility that this was entirely my fault in their eyes. Fortunately, they said they'd deal with it - presumably by gluing on a new dropout sleeve (not convinced they have the expertise) or by swapping my stuff on to CellnagoV3. We will see! 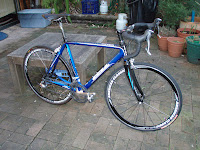 What it will look like....eventually 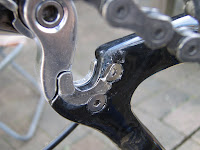 the offending dropout sleeve
Posted by langles at Monday, July 20, 2009 No comments:

Well, another Tour is under way. Looks like the Satan-A team is going to suffocate it though (thanks GK). Felt sorry for poor old Cadel - being told to get out of his own break no less! I suspect that High Road didn't want a hard chase to ensue as it might have meant Cav missing the time cut, but couldn't understand Saxo's logic - providing it was Astana doing all the chasing - surely a good thing for all the other GC hopefuls. Boo to such negative racing - and get rid of those bloody radios. Had to fork out for a digital receiver to watch le Tour on SBS 2 - another notch in my being dragged into the future. All I need now is the high def TV to go with it. Anyway. To more important matters. Looks like the Cellnago is no longer. After only ~15000 kms (and no park benches or other altercations) it has developed some cracks on the seat tube near the bottom bracket and on the drive-side chain-stay. A bit disconcerting to say the least. Have just returned it to the shop, who had no hesitation in saying that the warranty (5 years) would cover it (thank you Giant factory!). So fingers crossed this goes smoothly. Hopefully will be riding a new (and lighter!) frame next week. It seems frames cost nothing these days. I enquired about the option of paying the difference on a totally built up machine (equivalent new groupo), but was assured it wouldn't save me much. So I'll persist with the 07 group for the time being. With any luck similar fractures will appear at the same spot on the next frame (my awesome power, you see), and every year and a half I'll simply upgrade to a new one - Jonesy style (I think Jeff went through quite a handful of GTs over the years). The only caveat, of course is that I'm stuck with the same bottom of the ladder brand - which hurts a little if you are a hardened bike snob like me. 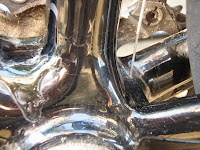 cracks aplenty on the seat tube and chain stay 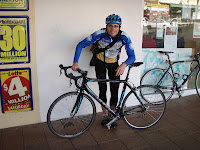 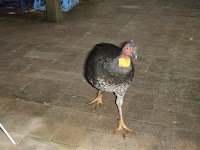 Completely unrelated, but recently scrub turkeys have been visiting my place most mornings, expected to be fed. Showing absolutely no fear, it's a wonder they make it to adult-hood as the chicks, once hatched, are left completely to their own devices. This one wanted into my kitchen!
Posted by langles at Wednesday, July 15, 2009 4 comments: