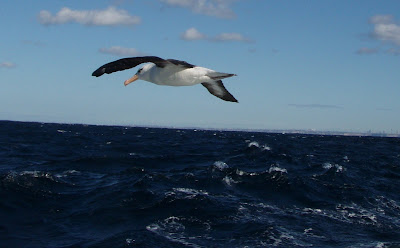 Had a great day off Sydney on my first Pelagic. Even managed not to throw up, in spite of heavy seas. Loads of albatross and petrels etc - about 12 new species for me. Here a black-browed albatross (and his/her beady eye indicative of the"Campbell" race) checks us out whilst crusing by. Sydney skyline in the distance.
Posted by langles at Monday, June 21, 2010 No comments:

Some more random images; a couple from dirtworks, followed by the Stromlo descent from Cap Punishment - see, not too much dirt at all! 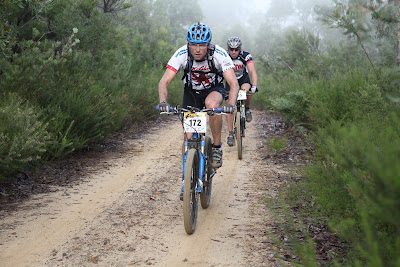 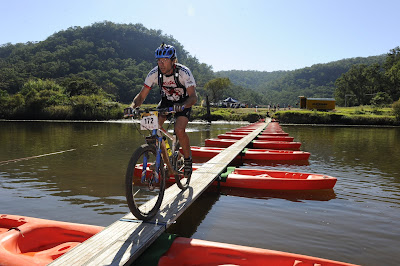 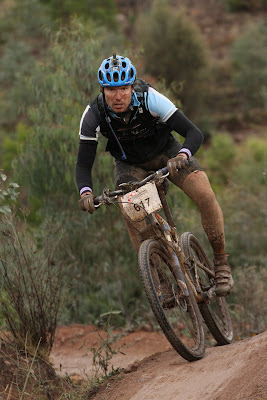 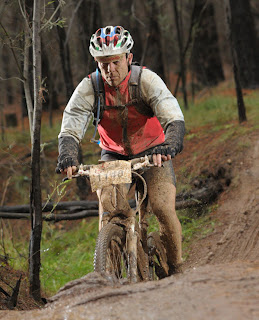 The inaugural mtb enduro "Capital Punishment" was laid on last weekend. The 105 km course takes riders from Kowen's Forest, east of Queenbeyan, and winds its way through Majura pines, past the airport, through Dept. of Defence land, and temporarily along major roads before blasting up the main climb at Mt Stromlo (west of Canberra), and descending via the Skyline traverse to the finish. I was especially looking forward to the event as apart from the Mt Stromlo section the rest was going to be new trails for me. It's been a long time coming too due to last years cancellation (Defence said No). It was certainly worth the wait, but not for the reasons expected. The course profile didn't look too bad, with the elevation at the end 200m lower than the start. Canberra locals anticipated fast times - well under 4 hours for the winner. Most of the climbing (~1500m in all) and single-track would be done by half way, with a fast run in to the 3rd and last major climb of the day at the end.

The weather in Sydney leading up to the event has been wet - one of the wettest May's on record. But Sydney is on the coast and, as we all know, our nation's inland capital is pretty dusty by comparison. That said, the ACT forecast was not good. I had been nursing a cold but felt just well enough to make the trip. However, if it was raining at the start I was not riding! (famous last words). On Friday eve I met Ben, Michael and GK at our Queenbeyan abode where we fiddled with bikes and readied race kits for the following day. T'was not quite midnight and the rain was already falling - hard. This it did all night long. We got up at 5:30, breakfasted, and got wet packing the cars. "Might as well see if the weather breaks for the start" - the start being a paddock 20 min out of town, the scene upon arrival being nearly pitch black due to the heavy clouds as 7am approached. I didn't really want to get out of the car, but all the other people readying themselves was kind of infectious. As with the massing of lemmings, stupidity thrives in numbers ("well we're here!"). It was crunch time. Ben and I assembled bikes in the rain, donned spray jackets and at about 7:10 I was off in the 3rd wave of riders (of 10). The trick I assured myself was to set a tempo hard enough to stay warm, but soft enough to prevent coughing uncontrollably by the end.

A few km of fire trail was followed by the first section of single track, which immediately resembled a milky trench, sometimes over axle deep. The first few sections of trench were all about experimentation - where to ride, where not to ride, how to let that rear end slide - to stay off the even softer edges, etc. Interestingly, the safest line was exactly where it would have been had the track been dry - straight down the middle, or 2/3 up the berms. After all - there's no where to slide if you are already in the bottomed out. To say the going was frustratingly slow, muddy and slippery is a gross understatement. This was the sloppiest gooiest slimiest stuff I have ever ridden. It didn't take long to succumb to the first of my 3 crashes. But I was not alone - slid out bikes and bodies were a familiar sight. Eventually the single track sections would be escaped - like tractors crawling from bogs, and some speed could be gained on the fire trails. But not too much speed, as I again had the bike slide from under me doing about 30 km/hr on a delicate downhill corner. Must have ticked the brakes. The clay-like goo coating my legs protected me from what would otherwise have been pretty nasty road rash. So the course progressed; single track trench warfare interspersed with sections of deceptively slimy fire-road, countless times over. The more darkly soiled sections of forest had the consistency of gravy, making many of the steep pinches unrideable - at least with my dry weather tires (crossmark front and rear - must get second set of wheels!). Periodically we transitioned to grinding over paddocks - the tussock grass providing corrugations akin to riding down the centre of railway tracks. I was getting so beaten up on these sectors I might as well have been on a rigid bike.

Eventually I gained the 60 km feed (in 4'10"!!! - man this was going to be a long day) and availed myself of some food on offer, before heading off once again - once I found the right bike that is - they were so adorned with mud as to make them virtually indistinguishable. I refueled with some gels again at the 80 km feed. My motivation picked up as Mt Stromlo approached on relatively fast dirt tracks - until one last trench from hell - oozing chocolate paste - actually moving like lava. I couldn't even negotiate 5 meters of this stuff before slide-grinding to a standstill. Ended up pushing the thing with difficulty for several hundred meters. This feat was not aided by the fact that the tires and bike were entombed in a couple of kg of paste - not to mention my shoes, which were like blocks of cement. After such rugby-scrum exertions the heat generated prompted me to finally remove my cape. Eventually the trench ended and the beautiful tracks of Stromlo proper were gained. I really enjoyed the climb up the mountain and the bombing bermed run to the finish. Despite an equivalent drenching, the granite-based dirt of Stromlo just soaks up the water and rides near perfectly in the wet. Good to know for the October solo event. For the record, the winner came home in a shade under 5 hrs! The best I could manage was 6:45 - quite a bit longer than I anticipated, although whilst trudging through the above mentioned "Pit of Despair" I thought that 7plus would be the order of the day. This placed me ~100th of the ~880 who started the 100 km event. I was just relieved it was all over. "Punishment served", as the finishing medallion stated.

The finish area was a comical sight - the appearance of riders crossing the line was dependant on whether mud guards had been installed or not. Whilst my front was not too bad (courtesy of my crap-catchers), my legs and back were encrusted in dags of various colours and shapes. We might just as well have finished Paris-Roubaix, or some other northern European classic. I gave the bike and legs a hose, snuggled inside my down jacket (the temp was cold enough to see ones breath) and waited for the other boys to arrive whilst chomping down pizza and baked potatoes. The other lads had to endure a particularly heavy rainstorm before finishing, somewhat cleaning their attire. Once hosed and changed we loaded bodies and bikes into Ben's Subaru for the transfer back to the start to pick up the other cars. We debriefed at the Paragon Cafe in Goulburn on the drive back to Sydney, and are now in various stages of getting bikes serviced (more accurately, rebuilt) and contemplating the hilarity of it all. Truly epic stuff, and another event none of us will forget in a hurry. 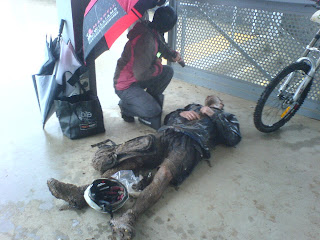 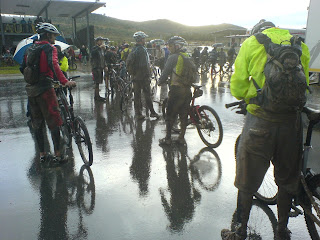 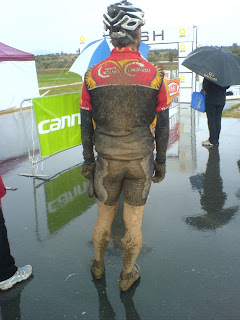 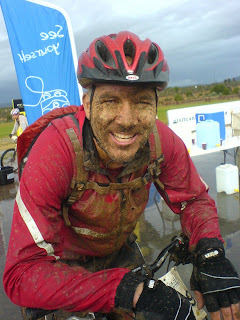 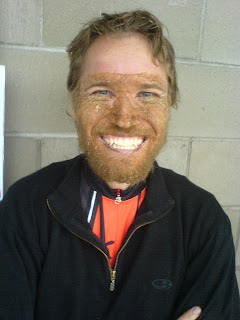 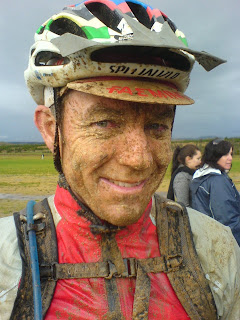 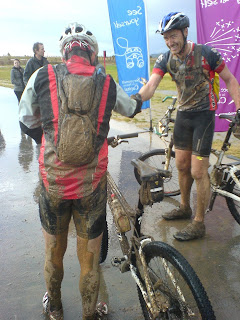 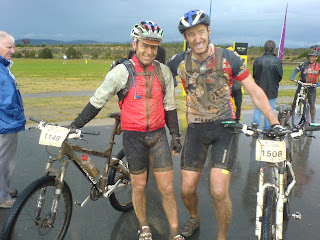 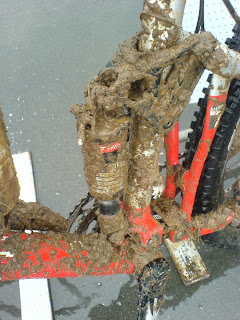 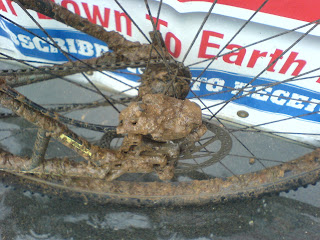 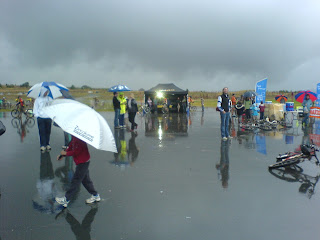