The last month in Sydney has been pretty crap weather wise - rain almost every day and cooler temperatures to deal with, but without the sun to help with the morning commute. So, a decision Anita and I made some time ago to head north for some climbing at "Frog Buttress" (Mt French) in QLD in June seemed like a stroke of genius - well, the truth of the matter was that it was almost entirely Anita's genius, as I have purposely avoided climbing at Frog since I took the sport up some 20 years ago. The reason for such reluctance is that the style of climbs Frog is renowned for - cracks - is the style I am generally least well versed in and expert at. I've generally taken the Mike Law view to crack climbing; "start at the crack, move one meter to the left, and go up the wall". Not so easily applied at Frog, however, as nearly every route is a vertical crack, many of which require various styles of "jamming". As the unpleasant word conjures, this technique requires various appendages to be wedged into said crack - feet, toes, knees, elbows, forearms, wrists, knuckles, fingers...whole bodies sometimes - often in painful contortions and sometimes mixed with blood and tears. And why? (a) in oder to remain attached to the cliff and (b) to make upward progress. That is not to say that in the past I haven't had success on cracks - but I tend to make them real grovels (I still remember the near nervous breakdowns I've had on "Thundercrack"(21) and "Morfydd" (19) at Araps, on "No Complications" (15) at the Wolgan and on "Amen Corner" (18) at Piddo. The one redeeming feature of crack climbing, of course, is that the gear is generally bomber - so even if the climbing is painful it is generally safe. More recently I had a genuine leader fall out of crack route coincidently named "French Crack" (17, also at Araps) in the presence of E and Karel (of course I take no hesitation in listing its new grade of 17 - at 16 it was obviously a sandbag). Anyway - if my (pipe) dreams of doing anything at Yosemite are ever to materialize a good dose of Froggy is probably in order.

Although driving from Sydney to Frog can be done in a big day, we decided to break the trip up by going inland to Mt Kaputar, with a view to scrambling about on some of the volcanic outcrops. Having camped at the top (1400 m), however, our plans were dashed by a phenomenal thunderstorm that came in during the night and pretty much soaked most of the stuff in the tent (time for a new tent!) - not to mention keeping things wet and chilly the next day. Persistent cloud also reduced visibility to about 50 feet, so the next morning we packed our soggy cold selves into the car and headed back to Narrabri, before heading north. Rather than go via Moree, we took a smaller road which takes the northern part of Mt Kaputar and stopped by the "Sawn Rocks" - fantastic volcanic columns not too far from the car, and well worth a visit if you are in the area. Arrived at Frog well after dark (again) but at least had a great campsite equipped with A-grade fireplace - and even firewood! In contrast to most camping places in NSW where they have either prohibited campfires (Blue Mountains), or provide the fireplace but require you to bring your own wood (Kaputar), at Froggy the friendly rangers bring you fresh wood every day. Unbelievable!

What followed were 3 magic days of climbing - perfect cool-to-warm days, low humidity = dry hands, easy access to the climbs, no sunscreen required, great camping and a warm fire to keep things sane at night. For the most part we stayed on the easier starred climbs, and I cunningly managed to get myself up most routes without any jamming at all! However I was feeling a little under done. What I needed was a real battle - to make me feel that I had truly experienced what Frog was all about, and I found it in a climb called "Infinity" (19). Infinity not only takes one of the best lines at the crag, it is also one of only a handful of climbs to receive 4 out of 4 possible stars, with the guide claiming it to be possibly the best climb at the grade in the country! I was sold, and although the tick-list to date included only 14s, 15s and 16s, I thought I should be capable of handling 19 + 2 = 21 (coming from the school that automatically add 2 grades to any crack route). The bottom 10 m of Infinity can be climbed via one of two possible seams - the more direct (LH) is described in the guide as a "super old school off-width start…(and the)…only way to go for apprentice gruntologists. All the sane people start in the corner to the right". Needless to say I started in the RH corner, which had some powerful moves but did not constitute the crux. At this point I had to make a decision as to which cams to place and which to save for higher up - always a bit of a gamble, as our combined "rack" only constituted 2 cams of every size and there was 40 m of crack to cater for. As it turned out I picked the perfect ones to leave behind in the RH seam as I gingerly swung into the main LH seam, but this didn't completely absolve me of trouble higher up.

The few meters which came next - through a bulge purportedly the crux didn't trouble me too badly (one solid jam - not too painful), which lead to another ~10 m of reasonably solid but cruisy climbing where I extensively walked first a green, then a red Camalot (or the other way round?) up the perfectly uniform splitter seam. I was starting to feel cocky like I had this thing in the bag. At this point (about 2/3 up) the seam opened to slightly bigger than fist size as it curved to the right through steeper territory before straitening for about 10 m of perfect verticality. This is where my troubles really started. I had pretty much worked out that the only way I was going to be able to climb this section was via jamming - a lot! (up to elbows with both hands). The tactic of walking cams with me up the seam became significantly more difficult now that my vision was severely restricted by contorted and restricted arms and feet. A few grunty moves later and I found myself in a pretty sustained position - both fists jammed and toes mercilessly squashed into the seam with the gold Camelot that I really wanted to protect the next ~5 meters below my feet. No matter what I tried I just couldn't retrieve the cam from my stance. My strength was fading and I was entertaining thoughts of failure - flight style. Nothing for it but to try to reverse the moves and down-climb what for me was the crux. Somehow managed this, gained a rest of sorts, then had to re-climb the crux on really tired arms to another awkward stance to the side (another rest of sorts) placed the retrieved cam as high as I could get it, then re-inserted myself into the trench and jammed the next 5 meters for all I was worth till finally a horizontal was reached allowing more gear and a considerably easier last 10 m of twin cracks to the top. Talk about being put through the wringer! Great climb and very relieved and satisfied to have ticked it clean! Without question the highlight of the trip for me.

We had another days climbing at Frog (our third). By this stage our bodies were pretty sore(upper back and shoulders in particular, and my hands and forearms were grazed as i eshewed taping them as i should have for Infinity). Time for the next phase of the trip. We drove east to catch up with my sister, her partner, and my little nephew and niece at Mudgeeraba for the night. The following day (Thursday) we shopped at Burleigh Heads before marveling at the vulgarity of the Gold Coast en route to the more pleasant Sunshine Coast at Coolum, where we stayed with Anita's folks for two nights. On our way back south we were hoping to get 1/2 a days climb in on the granite domes of Moonbi (just north of Tamworth), but despite bashing around the base for a few hours just couldn't find the starts of the climbs I have such fond memories of. This also involved avoiding contact with a pretty unhelpful and unfriendly landholder whom we had earlier approached re access (the sign on the gate read "Tresspassers will be shot. Those who survive will be shot again" - or words to that effect - fortunately his neighbour was a lovely fellow). We eventually accepted defeat and settled in for the long drag back to Sydney - this time via Captain Thunderbolts way - which is a real beauty if you haven't driven it before. Ahh crap - work awaits. 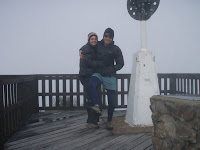 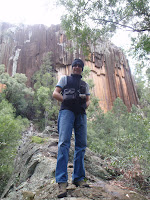 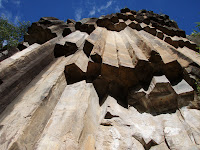 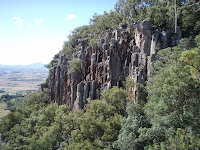 the pillars of Frog, "right" side 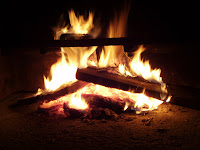 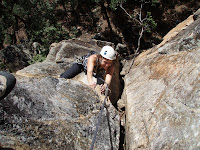 Anita topping out on "Mechanical Prune" (15) 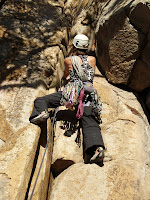 and ladden to the gills on "Electric Lead" (14) 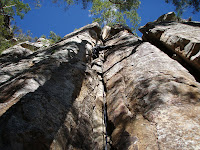 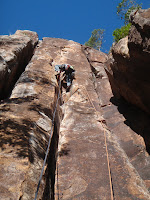 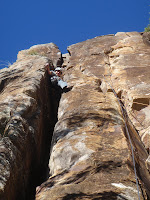 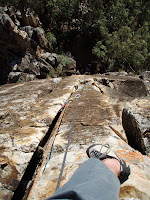 and looking down the "vein of pain" 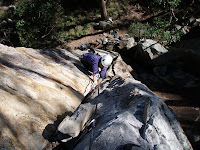 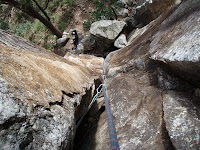 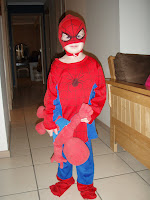 Anita and I had nothing to do with Jackson's spiderman fettish. Of course he is in disguise by day. Also; Jessica with "Duck Duck", ready for another day at Kindy. 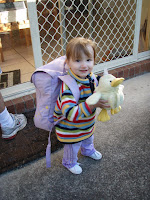 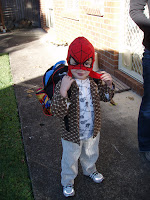