Another Dirtworks100 is done and dusted - or more correctly, I have once again been done and dusted by the DW100. The course this year was identical to that of last year - which means that it is fractionally easier than the first two years I rode it. The difference; somewhere after the second feed is a sector which got bulldozed, taking out one of two km of more minor rockiness, probably translating into a savings a couple of minutes. But otherwise the course still remains a brute. It's funny how time passes and memory fades to the point of aspiring to go faster, yet losing track of exactly what that will mean in units of hurt.

The leadup to the race had gone well for me on multiple fronts - about 4000 km in the legs thus far this year, a new bike, and some preparation rides which boosted my confidence. I did the Andersons/Oaks trail double twice, bringing my time for the 93 km loop from 5 hrs flat down to 4:43, then 4:10 - going fairly hard with no stops. Surely a good DW time well under 5 hrs was easily possible.

My DW100 times of past years had also been in decline, from 5:58 (overcooked), to 5:48 (undercooked), to a very overcooked and painful 5:20 last year, where cramp was my constant companion for the last 40 km. This year I was probably fitter, lighter (collectively), and smarter, now that I run electrolyte (Gatorade) in everything rather than plain old water. I decided to abandon the 3 stop strategy of last year and not stop at all this year, carrying 3 liters on my back, and another 750 mL on the frame. If I could knock the course off quickly that should suffice.

I camped in the usual spot with Aaron, fresh off a broken collarbone and about to be baptized with his first mtb event. Had a headache the night before, which seemed to persist through race day. Had a reasonable night sleep but was a little congested and not feeling 100%. Enough excuses. A lovely mild morning arrived meaning no gillets or arm warmers were required for the start. Some rain on previous days was enough to put the track into perfect condition - settling the sandpits which rob one of speed between climbs. We were off. I positioned myself towards the front of the first wave of "non-elite" riders, and found myself rubbing shoulders with Rod McGee, and Brett Belchambers - both on singlespeeds, and both who would leapfrog most of the Elite riders and into the top 10 for the day! As we hit the first big climb I was about 15th wheel and already uncomfortably close to the limit on what was to be a long day, so when the steep section really started to hurt I was the first to unclip and push for the middle part of the climb. I rode the last 3rd of the climb but by this stage probably 50 riders had streamed (actually crawled) past. Eventually settled myself down and concentrated on staying with one small group, then another, as they constantly split and reformed in response to the terrain. My strengths were definitely in the ups, rather than the downs.

The going was fairly hard but I had to believe that all the sweat pouring out of me would result in a good 50 km split. Perusal of last years results confirmed that almost no one does a 2nd 50 faster than the first. It's more the case of how badly the 2nd 50 split blows out. So it was important psychologically that I was under my ~2:30 split of last year if I wanted to break 5 hrs (my main aim this year). The technical rock garden section from ~km 35-45 seemed to go forever, but it serendipitously revealed a suspected positional problem resulting in pretty horrible lower back pain, which I only seem to get when I'm going really hard, and which had been with me since km ~ 20! I found that when forced to pedal at the nose of the saddle to negotiate stepped uphill sections the pain would evaporate, then gradually recur when I slid back to a normal position, so I ended up riding a good chunk of the rest of the course on the nose of the saddle (and will make the requisite adjustment at some stage). I noticed the first twinges of cramp at almost exactly the same place as last year, at approx 46 km's in. Not an encouraging sign, although I clocked through the 50 km pit in 2:21, so I kept it moving, consuming a food bar on the next easy climb. The horrors of the second rock garden section (55-65) eventually passed and I cautiously negotiated the big technical descent of the day. I got spat out onto the valley road by my lonesome, which was perfect as it meant I could tackle the bridge (only 12 inches wide, but about 50 m long - constructed from pairs of 6 inch scaffolding planks lashed to canoes) without pressure from behind. I've fallen off this thing before and heeded the advice of someone else before the start; "whatever you do, don't look down, just focus on the exit" - good advice!

Consumed another energy bar after the bridge before the second big climb of the day, which takes one to the top of the course at ~ 320 meters. The twinges of cramp were more frequent now, but I didn't panic - just kept sucking down the liquid and kept the cramps just below the surface and manageable - which was hard to do as the next big climb started to bite. As I hit the 80 km to go mark, with most of the climbing done with (about 2000m in all) and the clock at approx 4 hrs, I started to think I had this thing in the bag - but the next 10 km was excruciating - had to be super careful not to lock up on every pinch (dozens of these), and ended up walking about three of them. As my average on some sections was struggling to topple 10 km/hr it started to dawn on me that a 5 hr split might not be possible this year, but eventually the big drop arrived, and I kept my focus on sucking down the remainder of my liquid, and not pole-axing myself on the super quick descent - frequented by water bars waiting to unhinge the unsuspecting rider. The tarmac arrived and I struggled to keep the pace up before a final river crossing (knee-high) led to 4 km of dirt road to be covered in only 12 min. Out of water, out of time - just all guns blazing wrestling cramp all the bloody way, but eventually through the gate in 4:57:11, placing me in 59th overall (of ~ 650 who finished the 100), and 10th in the Masters category (aged 40-50).

Very relieved and perhaps a bit lucky to go under 5 on such a warm day, but I'll take it. Once again, far harder than I expected - you have to ride it to understand. But the pain has all gone now - even as early as when swapping stories in the shade of the beer garden consuming a steak sandwich and chips. The winner, BTW, having outsprinted his companion crashed over the finish line (literally!) in 3:57 - the course record of last year falling by another minute. Others who rode the 50 km event also had good days out - Ben, Felix, Gerard and Aaron all gave the thumbs up. No helicopters required this year either (first time in 3 years), in spite of numbers hitting 1500 entrants. Already I'm looking forward to next year! 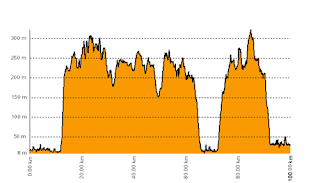