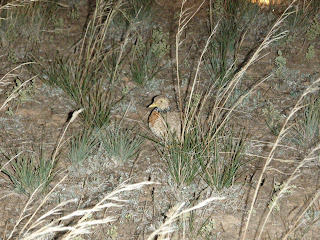 En route to Lorne this year we (most of the twitching team) went looking for the rare Plains Wanderer in northern Victoria - and we found him (or her, in this case), albeit with the help of a guide. 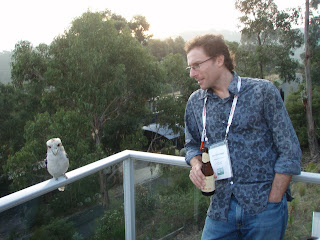 Conversing with the natives - this time at the hillside house rented by Lawrence and the mob from the Victor Chang - fantastic views! (Lorne Jetty in the distance) 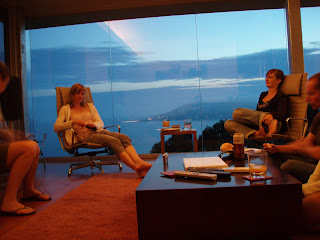 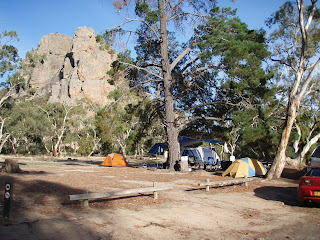 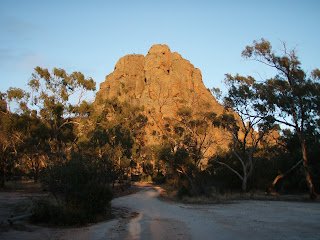 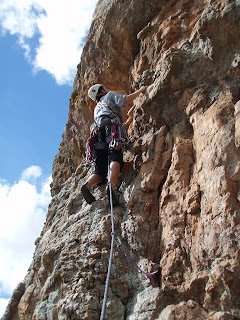 Anita gets the ball rolling with "Hell for Leather" (13) 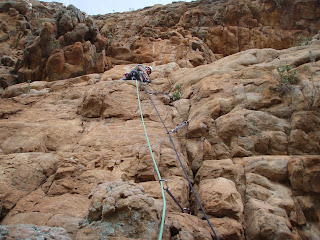 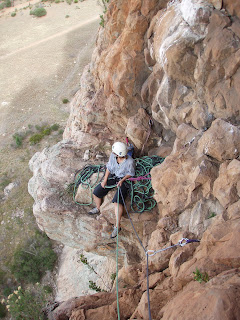 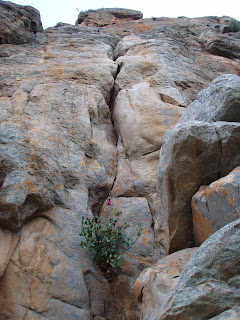 Less trivial was the appraoch pitch "Scorpion Direct", which although only graded 17 managed to spit me off. To add insult to injury, my trusty yellow alien cam proved immovable and i had to leave it behind. That pretty much canned thoughts of attempting the harder routes "Scorpion" and "Quo vardis" above. 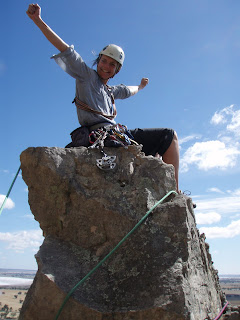 On the summit pinnacle of the fantastic "Tiptoe ridge" (5) 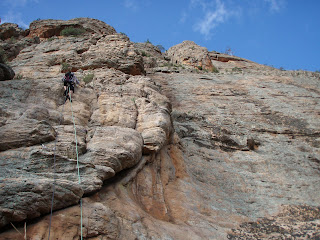 Anita leading the 1st of 5 pitches that constitute "Hot Flap" (14), left Watchtower Face. The route wanders diagonally to the right. 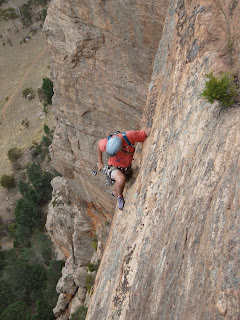 Tony high and no-doubt relieved to be placing another piece of gear on the runout 4th pitch. And looking down the route from mid-way through the 5th and final pitch (below) 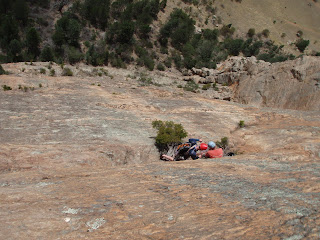 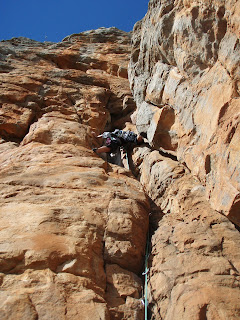 Wild stemming on the 2nd (above) and 3rd (below) pitch of Vandal (17). The 3rd pitch crux on this one is dangerously protected so you've been warned (and it was originally graded 12!). 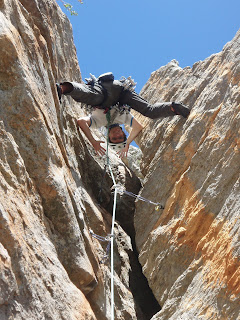 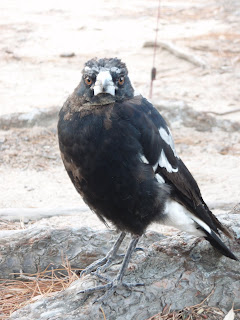 The guardian of our campsite, stealer-of-biscuits and gang leader, "Grandpa" 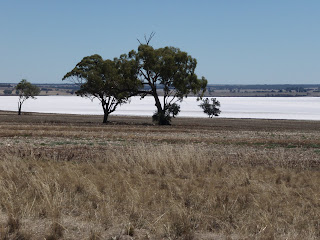 The Salt Late at Mitre. 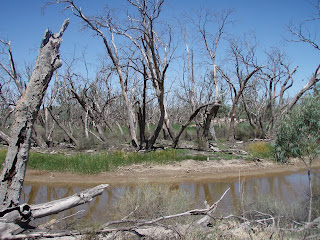 Disaster at Jeparit - all the river gums are dead - with the environmental flows present on the Wimmera River arriving too late. 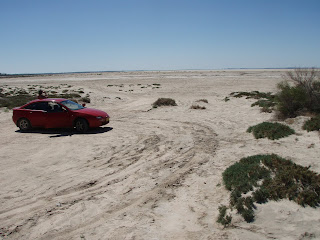 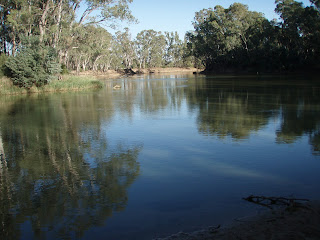 Well on the way home now, and the Murray River proves a more appropriate place for swimming.
Posted by langles at Monday, February 22, 2010 1 comment:

the long and winding road...

...to making a decision on a new machine - some musings in response to Kev's suggestion;

First off Kev, major bummer about the theft. On top of losing that with which you've bonded - especially if you've crashed together, you've got to go through the agonising decision of choosing another, and in an environment where the choice seems endless (increased choice, decreased satisfaction being a modern affliction).

In some respects deciding on an mtb is easier than picking a road bike, despite the bamboozling array of variety, as the choice is broken down to distinct sub-choices; a nested passage through Boolean logic. Let me explain.

Firstly, you've got some idea of what riding you'll be doing - XC, trail, all-mountain, freeride, jump, bmx, downhill etc (yes, there are at least that many categories - differing with regards how far forward you are positioned, and the amount of travel the suspension provides). Once you enter one of these branches the choices become whittled down dramatically. Next decision is hard or soft tail - most newbies to the sport skip the HT experience all together. Then there is the issue of wheel size; traditional 26er or the new-fangled 29er which is sweeping the mtb world at the moment - the bigger road-rim-sized wheels roll better with a bigger contact patch for traction whilst cornering, although the trade-off is a greater degree of body language required to steer these monster trucks through technical terrain. By the time you get this far budget pretty much dictates the rest. In my case I ended up tossing up between a Giant, Scott, or Specialized, all with distinctly different rear suspension platforms, but at the level i was buying into - all are pretty dialed by now. In the end i went with a heavily discounted 09 model of the Giant, which was by far the best spec'd, and came out on top in a review of the analogous 2010 models. Speaking of reviews, the website "mtbr" has an unbelievable wealth of user-supplied information on pretty much every mtb bike and part you can imagine (ie, a product is good, bad, sucks, fragile, robust, heaps of technical info re compatibility etc) - absolutely brilliant resource - but i don't know if a road-bike equivalent exists). Although the Scott was a little lighter (carbon frame), i opted to stick with an Al frame as crashing is still something i tend to do a lot of, and i want this thing to still be rolling for a good number of years. Ultimately, colour and aesthetics didn't really come into it - although i still like what i see.

In making the decision, i contradicted what i'd said ad nauseum over the last year or so - that my next mtb would be a HT 29er. I ended up with another 26 dually - in part as the weights of the 29ers I can afford still make me wince a little, and because the Stromlo course is considered by most to be reasonably technical, at least on the climbs. So now I finally have what most would consider a light XC race machine, as apposed to a tank. But let me know say with even more certainty, that my next bike will be a HT ss 29er! Really!

Road bikes. This is an area where curves, aesthetics, branding and politics probably plays a much bigger role. Given that the UCI weight limit is still fixed at ~6.8 kg, I'm amazed at the different price points that span a ~ 2 kg window - given that they all do the same thing at similar weights. My crappy Cell (Version 1) cost A$2300 - full carbon frame with Ultegra throughout and weighing in at ~9 kg - unbelievable value, and the look and design eventually grew on me. This was an impulse buy made in the absence of money - and with the pressure of desperation; my trusty steel colnago frame had capitulated and commuting to work on the Stumpy (aforementioned tank) was killing me - so i just walked in off the street one morning - looked it over, and bought it in literally 5 min. The frame is actually a blank from the Giant factory in China - so in effect this was my first Giant purchase. Although i bitched about it (unappealing curves and commonness - oh yes, i am a bike snob at heart) i must say in hindsight it was a great machine....until i noticed some hairline fractures in the bottom bracket area after 15 000 km. No issues with the warranty, and emerged with an even lighter 09 model (weighing 8.6 this time! - the same as GKs top end Look of ~6 years ago). Of course, the retardedness of this replacement frame has already been bitched about on these pages (rear skewer must be removed in order to extract rear wheel). AHhrrr. Unfortunately, the fork on this frame is still the original (going on 20 000 km +), so i now have my eye out for a replacement frame and fork. Given that i've now blown my serious bike budget for some time to come, i think i might chance my hand with an el cheapo nameless blank. Google "best bike bargains" - loads of excess blanks of different styles from the big carbon factories for about A$500 delivered! Will probably get round to this later in the year and just swap the groupset over.

With a healthier budget, of course i'd opt for something a little more aesthetically pleasing and perhaps unusual (with real quick release wheels to boot!), to set me apart from the sheep. I'd probably still shy away from the absolute top models, as anecdotaly i hear story after story about top frames cracking, although the manufacturers are very good with warranties but the turn-around for these to be resolved is still a pain-ita. Probably better IMO to go for a cheaper fractionally heavier frame - lower price point - as any issues with the frame blank will have been well and truly addressed in the cheaper heavier models (which more people will purchase and ride and where there is greater potential for breakage-related litigation), especially if you are a bigger heavier = more powerful rider :). If you want your ride to really perform better, wheels (I imagine) would probably be a better place to splash the big coin - although i'm sure that is part of the equation with an expensive bike anyway.

That's about all my hangover will allow at the moment - now that the conference is done with. I'd be interested to read your own take given that you also "know too much". Good luck with the purchase! Time to jump into the car and head into the scrub for a week of warm orange rock, dust, flies and cold beer hiding in the esky. 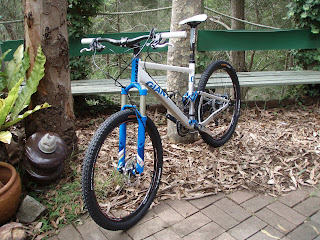 Behold the brand-spankers langles-mobile. For most of you who are trapped in road-bike world the following probably means nothing, but for the record it's an "09 Anthem x ltd", last years top of the line giant XC model; Aluminium frame with Fox RP23 rear shock and Rockshox SID forks, XTR everywhere, plus carbon bars, post and even seat rails! 10.6 kg sans pedals....a big step up (down actually) from the stump (Approx 12.7 sans pedals). Cost more than my car, so no excuses now. Of the 3 things I vowed to change for the next 24solo (lighter bike, dont crash, and learn to corner), this is the first and perhaps easiest item accounted for. Can't wait to ride it but will have to patiently await the passage of a conference, followed by another weeks climbing at the annual Araps pilgrimage - which i'm hungry for as my form on the rock (well, the gym at least) is quite good at the momemt. Patience...grasshopper!
Posted by langles at Monday, February 01, 2010 6 comments: