Actually went climbing with Neil on Sunday, in spite of it being a real howler of a day. Last time I climbed with Neil outdoors was probably Araps Feb 2008! He was keen to do something after last weekend's blokefest, so we initially eyed up BBB, but the winds made it all too dangerous. Instead, decided to do "Bellbird Wall" at Pulpit rock near Blackheath. Facing east it should have been on the lee side of the wind and sheltered, yet get morning sun on a chilly one - the perfect location for such a day. Unfortunately, whilst generally well protected from wind, the sun was already round the corner when we arrived. To add insult to injury, the rap in was a bit of an epic - although at least it was in the sun :) Should have been 2 strait-forward 50m drops, but we somehow started at the wrong rap station (the one in the sun!) and ended up descending down what turned out to be a grade 27 called "Stone Poem" involving 3 drops, 2 of which were hanging belay anchors which requiring some swinging to even reach! Fortunately, Neil has a very cool head for such things. Ended up doing the climb - pitches of 16, 17, and 15, which on the whole is probably worth the 2 stars apportioned. Ring bolts all the way. 1st and 3rd pitches lovely- 2nd one; awkward loose damp crumbly horrorshow, but with amazing warm moist draft pumping up the upper crackline - a first for me and very welcome for numb fingers! Normally such cracks give you a blast of chilled air. Afterwards went to Mt York to try to catch some rays in the form of Exhibition Wall. Last time i climbed it was probably 1991! Still a great route, which pushed me at all three cruxes but I got it clean...just... again. Stiff for 21 - probably why i've given it a wide berth for so long. 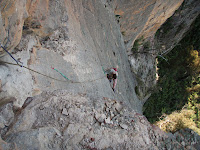 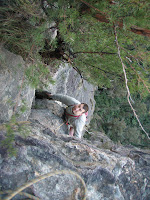 Neil topping out, with good exposure below 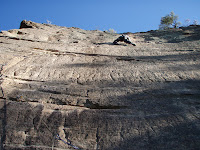 ... and hovering on the upper section of Exhibition Wall
Posted by langles at Monday, August 31, 2009