Nano-step for mankind, but giant leap for langles

In a stunning advance, which will have long-time observers stroking their beards in wonder, I have broken down yet another technological barrier and acquired an ipod - albeit the oldest model still available. With the 24 on the horizon, and judging by some of the reports I've read regarding the psychological battle which will ensue, many have credited success in some part to having one of these babies help them through the night, when conscious thought otherwise does naught but convince you of how stupid and pointless the whole exercise is - one which should immediately be replaced by sleep for a month. And I must say - in only the few weeks I've had it, this thing has changed my life! The drudgery that normally accompanies the evening commute in the dark is no more. Just gotta make sure it is also not the cause of my being flattened by a bus.

On the weekend, went down for the MTB worlds at Mt Stromlo in Canberra. Fantastic spectacle. Got a good dose of trials, half-pipe, downhill and cross country. Inspirational, especially considering that many sections of the XC and DH trails I will be riding over next month. Both mens and womens XC races came down to riders finally cracking their opponent on the last lap! And more 29ers on show as well in both events - probably the platform I'll go with on the next machine I purchase, although when this might eventuate is still not lucent in my financial crystal ball. 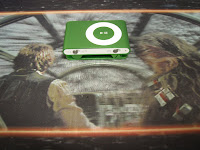 "I see it Chewie, but it doesn't come up on any of the charts" 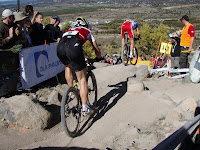 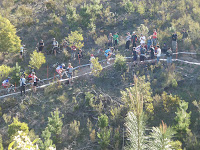 Riders on the pinch climb of "Cardiac Hill" 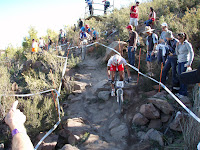 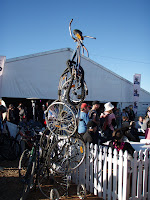 One of many bikeasuari littering the village 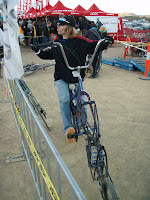 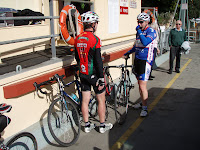 An almost unbelievable skinny GK drops in for the valleys.

cardiac hill - have to tilt your head for the start of this one
Posted by langles at Monday, September 07, 2009