The Plain Wanderers (which over the years have comprised combinations of Hynson, Langley, Holmes, Williams, Stewart, and Mudge) have pretty much stuck to a route kicking off at Lake Goran before tending eastwards and dusking at the Quipolly Dams near Quirindi.  This year we opted for something a bit different, in large part courtesy of the generosity of the Hunter Brewers who divulged their standard route and associated beta.  Following a new route would carry disadvantages – unfamiliarity with the nuances of new areas and general issues of navigation and timing, and dusking at least an hour further inland – but advantages in the form of a route honed by a very experienced team (consistently one of the top 2 in the state) and hence the possibility of a big score IF we had the combined talent to tick it.

The other big change was that we were only a party of three (Rob, Andy and moi).  Disadvantage; one less set of eyes and ears.  Advantages were several.  Firstly, the “majority” required to formalize a tick was simply two, rather than three in the case of a team of four.  As a quartet, getting three sets of eyes on the same target, or even simply having the discipline to constrain three birders to the same spot to facilitate such a possibility can be like herding cats.  Secondly, this meant a less cramped car.  Car space might seem trivial but by about 10 am on the Saturday morning the car will be brimming with nearly all the food and water supplies required to sustain occupants through to 4 pm on the Sunday – on top of changes of clothes, tents, sleeping gear and a couple of spotting scopes.  What starts as a myriad of ordered bags and bottles progressively transforms to a car-load of crumbs and trash come the end.

On Saturday morning we awoke from digs at the Golden Fleece Hotel in Scone and rolled out at 7 am, enjoying the cool morning as we headed north-west across the Liverpool Plains to check out Gunnedah and new spots further to the north.  In many ways the pre-twitch is the most enjoyable part of the trip and feels like being on holiday.  However as the day progresses the tension incrementally ratchets up as the last few spots are checked and driving times are estimated before arriving at the starting spot, where the expected targets still have to be found.

Our start location was absolute gold with an abundance of Painted and Singing Honeyeaters flitting overhead (a rarity this far east), and some other dry country specialists in our sights.  In the last few minutes we tracked a troupe of Speckled Warblers whilst simultaneously keeping a bead on a nearby Little Friarbird.  Eventually 4 pm arrived and with a handful of choice ticks in the bag we trundled back to the car and headed to Kelvin State Forest, then onto Keepit dam, where a bunch of stuff we were hoping to get had regrettably moved on.  As dusk fell we hit the Gunnedah pooh ponds where a bevy of top-notch ducks were scoped, including Bluebill and my first proper look at Freckled Duck.

A pub meal allowed the count to be estimated at 92 before we hit the highway for the long trek south-east to Singleton where a LHT would be made onto the winding dirt to the standard Allyn River rainforest night spot deep in Barrington Tops.  We spotlighted the entirety of this last sector hoping, like last year, to bag a swag of owls and frogmouths, however came up blank.  We bedded down in a tarp sandwich and as we drifted off finally heard a Boobook chime in, as well as a Channel-Billed Cuckoo and Noisy Pita, of all things – not bad for 1:45 am!

Five am came round real fast.  We walked the gully road; getting about 20 rainforest species on call, and were heading south again by 7 am.  Next stop Green Wattle Road for the eastern dry woodland specialists such as Fuscous and White-Naped HE, then the “Maitland Economic Zone”, where a few more honeyeaters (Yellow Tufted and White Cheeked) were added before heading to the Newcastle baths for the seawatch.  At this stage a tally of 200 was definitely on the cards, however the seawatch struggled to deliver, and although we did well at Stockton, we struggled to get much more over the last few hours at Ash Isl, Hexam Swamp, or even at the Wetlands Center itself (the finish location), which was on the verge of being totally dry.

In the end we only managed 191, with too many “biggest dips” to mention.  OK; Musk Lorikeet, New Holland HE, Little Wattlebird, and Darter, to name a few. This turned out to be the 6th best score, one bird ahead of a few teams on 190 and another on 189.  Best team, incidentally was the Brewers who started at Lake Cargelligo this year, and who, after three successive seconds, finally bested the Monarchs with a whopping 252 birds, a new record by 2 birds!

Even though we tanked at the death it was still on the whole a great weekend away, and I’m already looking forward to next year’s event, and the prospect of maybe another new route to explore. 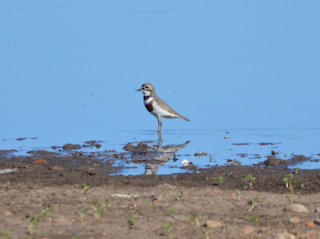 We spotted this guy on the pre-twitch at Breeza Dam; Double Banded Plover, and a new one for me.  These guys breed in NZ, and winter in Oz.  This one is in breeding plumage but seems to have missed the boat home.  Typically, when we came back to try and spot-light him during the race he was no longer present 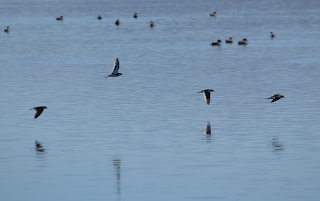 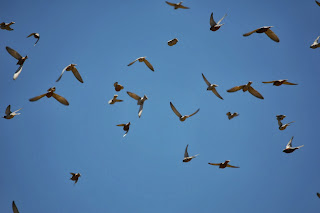 A mix of White Browed and Masked Woodswallows take flight.