On reflection, the weekend was a well intentioned plan that just didn't stay on script.  Funnily enough, despite it all it was still an enjoyable adventure with the boys, although obviously we would have preferred to emerge with full ranges of motion and free of cat gut.  I suppose I'll just have to take things one day at a time and decide mid week whether I think I'll be able to run on the weekend.  Obviously a major bummer if I can't, as this has been the overarching goal of the year. But whichever way it pans out, I suppose that's life!

Postscript – Tuesday.  No cracked vertebrae (much relief), and was actually able to ride in (very slowly) today.  Funnily enough doing anything on the bike is easier than trying to do anything off it.  So in all probability I’ll be a starter on the weekend, although I’ll have to temper expectations accordingly. 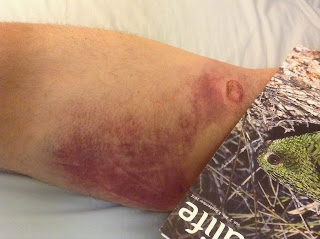