Today was tinged with a little sadness as it was time to part company, although I'm sure BT had had enough of watching re-runs of Le Simpsons on the teev and was keen to get home. It was no-doubt hard for him to have to watch us repeatedly leave in the morning and return in the afternoon with stories of a day he hadn't experienced. Having said our good buys, Karel and BT headed north direction Geneva, whilst the rest of us donned backpacks and headed south.


Being totally fed up trying to find a decent Italian meal in Albertville, we decided we'd fix that by riding to Italy. Not as simple as it sounds though. In order to get there we had to hall our arses over the "Petit" St Bernard (2188 m). The only thing petit about it, however, is that it is a fractionally lower pass than the Grand St Bernard, which we would be tackling the following day, all going well. The decision to cross into Italy was somewhat of a gamble, as once on the Italian side of Mt Blanc, the shortest route home (north to the far side of Lake Geneva) is via the Grand SB. Hence, we were counting on getting at least 2 days of good weather for 2 big cols. An extended period of bad weather might have made life tricky getting back for flights etc.

Anyway, the sky looked OK as well rolled out. Before getting to "THE" climb however, there was first the valley road to negotiate and a possible inconvenience in the form of the climb to Notre Dame du Pre, as we did on the previous day. However, arriving at the critical junction we unanimously decided to risk the freeway, although sections of it proved to be without shoulder. Once through the nasty bit we happened on a lovely shaded bike path by a fast-moving river full of Kayaks (lunch) which took us the rest of the way into Bourg St Maurice.

The climb itself was quite shallow for much of its length. Maybe I just had good legs but it seemed like one of the easier climbs of our tour, even with backpack. This is certainly the "easy" side. Ham and I had been down this side before, even passing a couple of French "youfs" carving the curves on monster skateboards! We descended to Pre St Didier, the run in of which comprised over a dozen nested switchbacks, and checked into the same "university" accommodation we used last time. Dinner over the road rocked, and Ham was in his language element. As luck would have it a local folk festival was happening in the piazza below our hotel windows - which had awesome views of the Mt Blanc massif BTW. This was intriguing at first - impressive were the stamina and stylish moves of the "Silver Fox" - although it became less amusing as midnight approached and it impeded efforts for some of us to get to sleep. All up, 113 km and ~1850 m gained for the day. 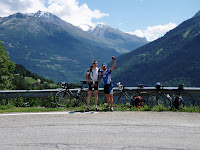 Ham and Kev with the Tigne valley behind them 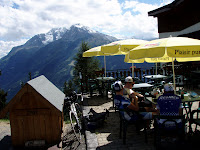 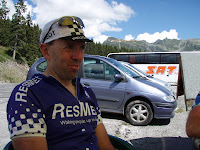 Greg en route to winning the battle of the backpack 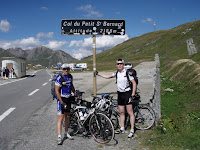 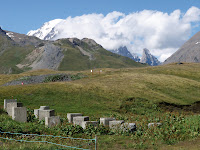 Mt Blanc from the Italian side, complete with anti-tank concrete thingies from the war 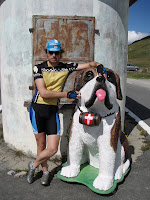 Dave and the dawg