Day 5.
Today we were greeted by drizzle in the am, which developed into solid rain in the pm. BT's little spill and Nigel's mechanical the previous day forced us to re-evaluate what we were to do for the rest of the trip. As it turns out, although it doesn't have the best assortment of restaurants for the culinary tourist, there is an abundance of good riding to be done from Albertville. There was at least another week of new roads and cols to tick. Hence, we scotched plans to head further south as originally planned and decided to stay put for the time being. This would allow us to keep BT company as he took some time to rest up a little before exiting on an earlier flight, allow Nige to get his bike fixed (or buy a new one) and allow me to spend a little more time catching up with Karel. In the end, Karel and Nige spent most of the day driving to Chambery to get a new derailleur hanger, whilst the rest of us just took it easy.

Day 6.
Rain, and lots of it all day. However, having spent the previous day couped up, some of us (not mentioning any names, Ham) already had a serious bout of cabin fever and were keen to get out and do a ride. We knew it was going to be super wet, so decided to hit the bike path to Annecy and back. 90 km of very wet riding, as it turned out. It also sorted out those who had good rain jackets, and those (moi in particular) whose rain jackets turned out to be not very water proof at all. This made for a cold wet and crankier-than-usual Langles at the turn-around. Ham, the smiling assassin in his uber rain jacket, managed to pick up the sprint home.

Day 7.
Finally, the weather looked like it had broken, although sizeable chunks of cloud adorned the upper valleys. Today we headed south aiming to climb to the ski resort of Val Thorens, before returning over the same roads. Nige and I were both climbing well today, and had a bit of battle up the final slopes. The summit roads were slick and fresh snow adorned the sides of the road and the resort buildings from the previous days inclement weather. Capes on and outa here! This turned out to be quite a tough day at the office. Karel's fancy altimeter thingy calculated that over the 130 km, we climbed about 2450 m, a little more than we estimated from the topo. On the way back Greggles and I managed to pinch a cheeky gap on route to another bike shop we wanted to check out on our return. Not to be distracted by such small-coin primes, Karel went for the glory and outfoxed the others for the stage (again). That evening was the last we would share with Nigel, who was going to be hitting the rail yard at sparrow's the next morning.

Day 8.
Today we set out to do an anticlockwise loop to Bourg St Maurice, returning over the lovely Cormet de Roselend. It was another big day - 127 km and 2600 m gained, according to Karel. However, we didn't do the loop via the line of least reisistance. In getting to Bourg St Maurice, and aiming to avoid what looked to be one of those dangerous red valley roads, we took a side trip and ended up on the very pretty but not-insubstantial 10 km climb up to Notre Dame du Pre (Karel taking the honours). Lunch was taken in the beautiful town of Longefoy, before we descended back to the valley which gradually climbed to Bourg St Maurice and the start of the Roselend. This was the climb whose descent claimed both Rogers and O'Grady in this years tour. Given that we noted only one heavy wooden railing on the climb, I assume that both riders crashed on the very same corner? With a few days of climbing in the legs now, the ascent didn't feel too bad, although the final km was into a brutal headwind, that slowed Kev just enough so that i could reel him in by the top. Being a fan of cows, there were many to admire on the col, which were being milked by farmers with their mobile milking machines. So as not to get too cold, we descended the first section to the lake where we stopped for Cocas and admired views aplenty. Allez Karel! Now for the main chunk of the descent. Steep, fast and technical. We had definitely climbed the easy side! Ham did a fine job leading the train down the final technical descent into Albertville, and snaffled the town sign which designated the stage. 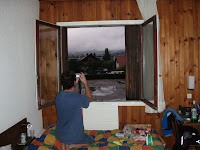 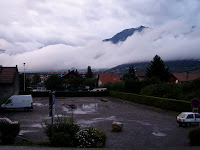 Shitty weather, but Ham and Kev are keen 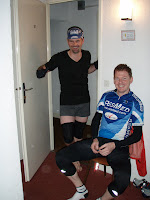 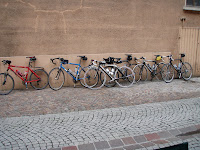 velocipedes, patiently waiting for their masters during a coffee break in Moutier 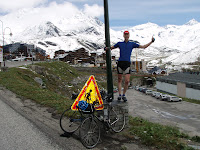 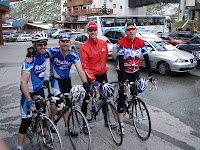 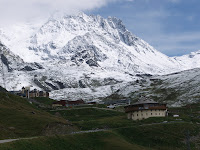 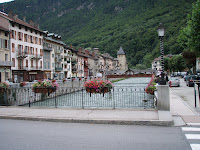 swollen river in Moutier, at the base of Val Thorens, a ~32 km climb 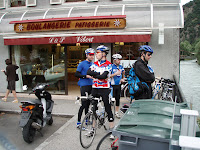 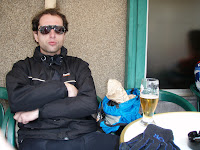 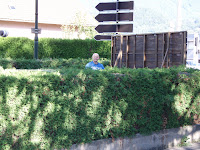 we bid BT farewell as we head off for another day of suffering, this time direction Roselend 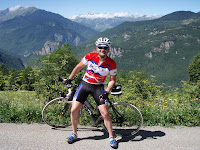 on the very pretty climb to Notre Dame du Pre 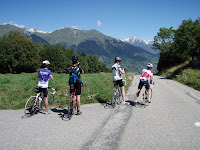 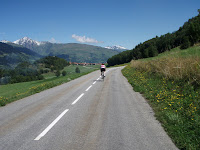 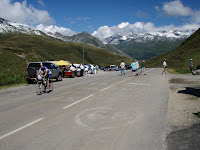 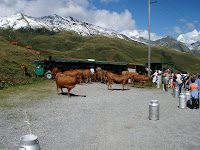 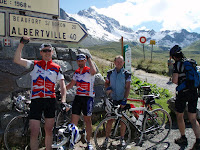 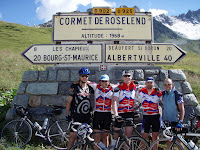 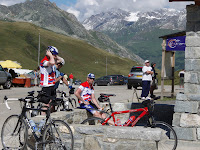 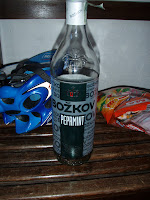 We celebrate with Bozkov, "the green stuff". The following day we will go separate ways.
Posted by langles at Saturday, September 22, 2007