One Bernard down, one Bernard to go. The day started with what turned out to be a somewhat speedy descent to the hustle and bustle of Aosta. I narrowly missed squashing a wayward cat on the run in - with the others all lined up on my wheel. Incentive for not dicking around too much was provided by the sight of "hogs-back" cloud formations forming down the valley. Potentially this could have been less than ideal for going over the col. After the late-morning constitutional - which for the cyclist consists of yet another visit to a local cafe/patisserie, we turned onto the lower slopes of what was to be another 30+ km climb. Steep at the start, flatter in the middle, and then steep again at the top. Ham and I have been over the Grand St Bernard before but from the other side. It sticks in the mind not only because of its size, but because of the lovely little lake and stunning vistas that greet you at the top. The last hour of the battle was made worse by the slow onset of drizzle, which apart from making a sweat-drenched body colder, was potentially going to play havoc with the descent. Fortunately, the rain never really set in. This climb is a toughy. We all battled one thing or another. Ham in particular was having trouble with his lower back, but we all got there in the end. We had fun trudging about in the snow, purchased an assortment of St Bernards - the stuffed variety (1000's to chose from), donned capes and started the descent. The top sector proved to be quite wet and slippy. The middle sector was both dry and unbelievably fast. The technical upper road gains an avalanche tunnel which is several (??) km long. This sector is joined where the motorway through the mountain emerges, and you find yourself rolling onto an awesome piece of super-smooth gently curving downhill. Without even attempting to pedal we soon found ourselves siting on ~70 km/hr (I could only freewheel), slotted between exceptionally sensible motorists. This went for about 5-10 minutes. Incredible to be carving the gentle corners at such a speed. The mountain roads in Switzerland really are a cut above what you'll find elsewhere in europe. I think we were all pretty blown away by that descent! Once again, we lucked in by climbing the easier side of the col. Lunch for me consisted of Racklette (yum yum yum). Partially re-fuelled, we then made the final plummet down into Martigny, and checked into the appropriately named "Transalpin" hotel. More beer!
The day: ~108 km, and ~1850 m gained, with the col at 2475m. 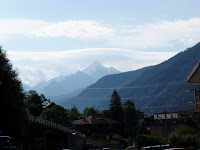 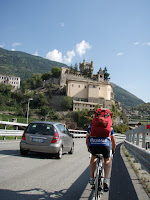 cruising down to Aosta 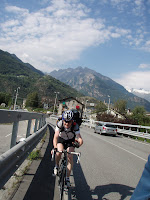 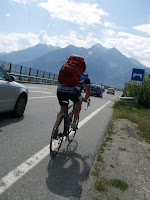 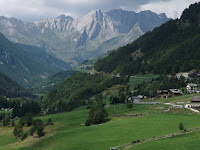 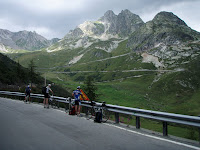 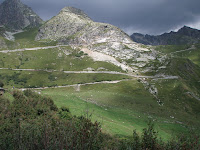 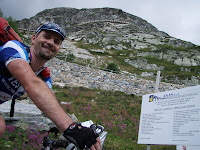 Ham puts on a brave face 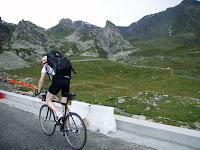 Kev on the final grind 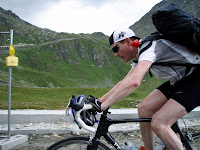 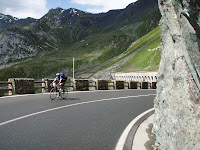 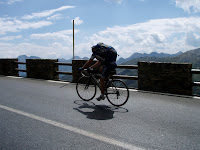 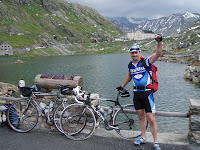 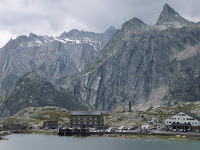 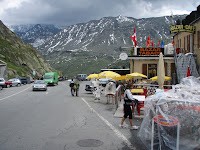 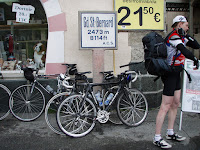 all dogged-up and ready to roll 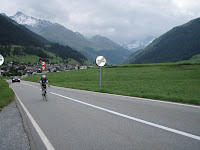 on the super fast run into Martigny 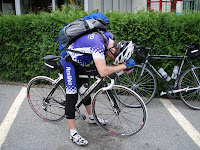 Greggles is cooked - and assumes the position
Posted by langles at Monday, October 08, 2007