Texas Flood (cont):
"Well dark clouds are rollin' in
Man I'm standin' out in the rain
Yeah flood water keep a rollin'
Man it's about to drive poor me insane" - SRV
Well, it's official folks. Sydney has just experienced the second wettest June on record, and the month aint over yet. Another weekend washout - not to mention mid-week rain, has reduced our training to not very much at all. I took advantage of a torrential Saturday evening by poisoning myself at a workmates party, confident of being able to recover without guilt the next day. A bail-out text message was posted at about 4 am (I suppose mobile phones have their place after all). I awoke to a worse than expexted hangover and only light misty drizzle. The guilt I reasoned i'd be able to side-step remained as I thought of the guys burning up the M7, clocking valuable miles. As it turned out, a combination of factors contributed to no one heading out that moring. What guilt? Ham and I still managed to get out sunday arvo for a spin up and down Bobbin head, which involved passing the still swollen Browns waterhole wier. Alas, the rain has returned with gusto! 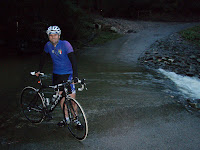