It's been a while since I played paintball. My first attempt was not a happy one. In fact I vowed, "never again!". I spent the game separated from most of my colleagues on another team and could barely see anything due to my goggles fogging badly. It was cold wet, muddy, and I got absolutely hammered. One bruise in particular stayed with me for about three months, and I still have the scar on my arm where it broke the skin. [I would only recommend it to anyone on the basis that is gives but a taste of just how awful war must be].

Somehow, Gereral Chow (PhD student from the lab) twisted, talked it up, appealed to my more vindictive and macho side, and got me to wimper a just-audible "ok", during a moment of weakness (there was probably alcohol involved). This concession not only disrupted what would have been the "Jilliby run" weekend, in which the Alpes mob was to ride up to the Yarramalong valley and back over two days with backpacks, it also prevented me joining in a potential Wolgan valley climbing weekend (not altogether a bad thing, given my Wolgan record - 3 days on the rock, and three returns to camp waaaay after dark).

What a difference a paintball can make! Ended up having a great time. I prepared myself mentally with thoughts of how Terry Tate might approach such a mission ("It's gona be a lonnng day - woowoo!" - certainly worth a look for the uninitiated; http://video.google.com/videoplay?docid=-6238953685626218421). My transformation during the morning was akin to Arlo Guthrie's "Alice's Restaurant" road-to-Damascus anecdote (firstly extolling horror at the thought of - then the grooviness of, hangin with the undesirables and discussin "father rapin' n stabbin" etc). Put simply, had an awesome time charging through the bush, filth and stagnant mud, whilst dosing out a considerable hammering to other people for a change, even if some of them were occasionally on my side (Sorry Dave! - an occupational hazzard of paintball, and no doubt war in general). In spite of the recent rain, we got a lovely clear frosty morning with low humidity (= no foggy goggles), and everyone from the Department gelled as a team. The record will show that we slaughtered the opposition, in this case a similarly sciency mob from the Millenium Institute. Howzat! 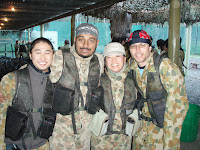 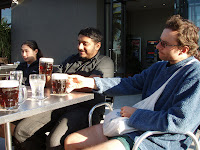 In contrast, Sunday dawned once more with grey skies and what turned out to be my most unpleasant ride of the year thus far. Having decided to "laugh at the cold" in this new post-global warming era, I left a little under dressed - in the end taking the philosophy of starting cold a little too far. Once the incessant drizzle actually became rain, I quickly became chilled to the bone for about 1/2 of a bleak 3 hour effort. Ham was similarly fooled (only short gloves and, like me, no cape) although at least had multiple layers on. Only Bret and Greg had the sense to go full longs, top and bottom, and Greg won the badge for being best prepared with what looked to be an A-grade raincoat. There you go Kev! - graphic proof of a proper serving of A-grade English weather for the down-under fair-weather Alpes aspirants. Hope you got some short-sleeve riding in. 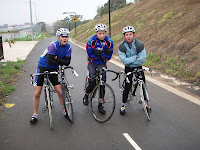 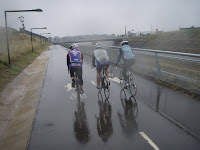