It was true, I now had a rhythm of sorts worked out.  My typical daily resupply would consist of three pre-made sandwiches or burritos (one for each of a breakfast, lunch and dinner), a few snickers bars (breakfast and dessert), about 5 cliff bars (general consumption), a protein bar (I liked the minty ones, dessert), a bag of salted nuts and a bag of jubes (both general consumption).  Heath put me onto the idea of having jubes in one feed bag, and nuts in the other, next to the bear spray.  And then there were the drugs - three to four 200 mg tablets of Advil, evenly timed, per day.  I wasn't comfortable having to use painkillers, but I now knew for a fact that they made dealing with my issues manageable, and that the day was going to be far more miserable without them.

An early roll out from Lincoln soon had me on one of steeper slopes of the tour.  No way I was riding some of those sections, but the descent down Marsh Creek Rd was an absolute cracker, with a tail wind giving it extra whip.  Next was Priest Pass, with lovely alpine meadows up top and a similarly delightful descent, wind assisted.  Here the scenery changed abruptly, with rocky features increasingly part of the landscape.  The  dusty road dumped us onto a serious bit a freeway, where strong tailwinds had us smashing towards the relative metropolis of Helena, arriving almost an hour earlier than I was expecting.  The first gas station encountered had two other riders downing cokes before seeking the local bike shop.  I did the same as Eddie also appeared. With bike shop located we hit the local burrito establishment then mooched around the shop waiting for our rigs to be serviced - mine was last in line.  The drive train was in desperate need of an industrial clean, and although early in the piece I decided to throw on a new chain.  Thanks Cole for doing a great job!

I was hoping to get further than Basin, another two passes away, but realistically this wasn't going to happen given my state.  The left achilles seemed to be holding however the same ankle was fragile as if sprained, making anything off the bike, or just clipping in and out of pedals awkward.  I was now also getting some pain in my right knee, perhaps as this leg, for some days now, had been delivering the lion's share of power.  I just resigned myself to tapping away at no pace in particular - as long as I was actually moving.  To top it off, inexplicably, I was also having issues with my hands, particularly my thumbs, which seemed to have lost the ability to grip.  This created problems zipping and unzipping jerseys, frame bags, or actuating the plastic clips that closed the dry bags of my handlebar roll and seat bag.  Rear derailleur shifting was now preferably achieved by reaching over with my left hand.  What was going on?  I recall Will Scheel discussing similar symptoms in his account of the TD, but now it was happening to me, despite the fact that I otherwise had no particular discomfort holding what I thought were pretty comfortable bars (Jones Loop).  I guess my hands just weren't designed to support the upper body like that for 16 hours day after day.  To further sour my mood the new chain was meshing horribly with the small front ring, which I knew was a bit worn coming into the event.  Should definitely have had this replaced before the start but this vintage of part proved impossible to find.

The first pass of the afternoon was fairly benign, but the second turned out to be an absolute shocker.  As I approached what I thought was the top of the pass a kindly gent sitting in his chair by an RV asked me if I'd like a whiskey.  He even had a chair set out.  I was tempted but politely declined.  Had I known of the horrendous Lava Mountain singletrack over the top to come I might have accepted.  Sections I could ride but I just didn't have the punch required for most of it, and my delicate left ankle made pushing and lifting the rig through extended rugga-bugga an ordeal.  It took over an hour just negotiate what I expected to take 10 min.  By the time I finally got out of there I was a wreck, and descended a wild rocky twitchy trail in failing light to roll into Basin late, straight to one of the few shops in town where I was relieved to see another TD steed and parked my rig next to Bryan's, then sat down next to him inside and ordered pizza.  A second tough, long day on the trot, with way too few km to show for it.  At this stage I was thinking that a 25 day finish, if at all, was a more realistic outcome.

Having discussed the horrors of the day over a beer, Brian and I agreed we'd pitch tents at a campsite just down the road which turned out to be managed and inhabited by some chapter of the Mormon sect, but the inhabitants were very friendly despite our alien attire, allowing us access to the hall/clubhouse, with bathroom facilities, where at least our bikes would be dry should it rain. 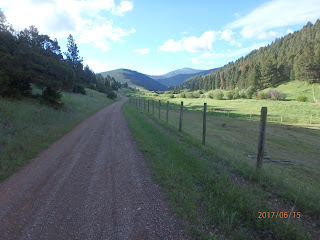 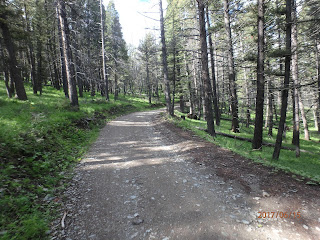 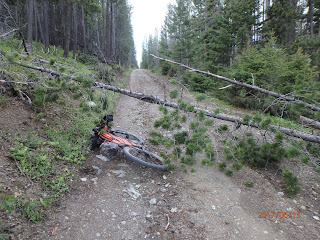 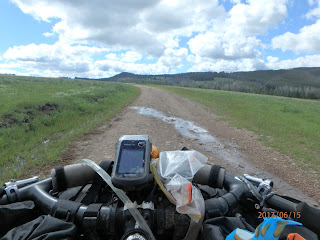 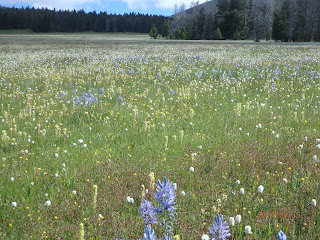 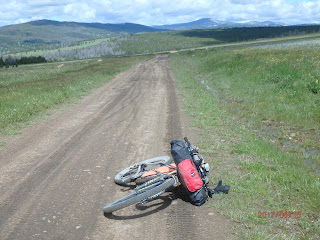 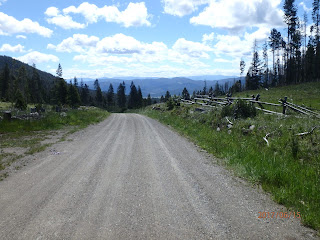 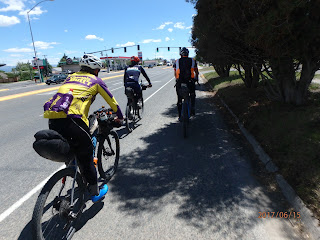 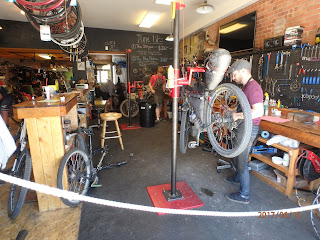 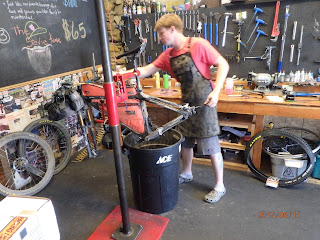 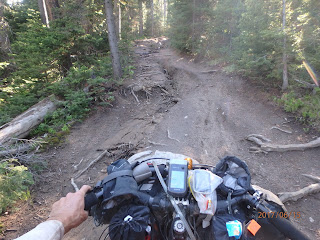 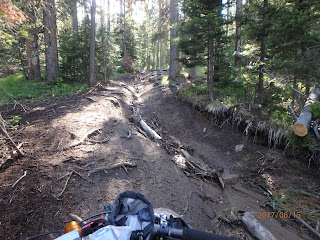 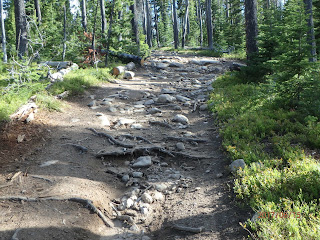 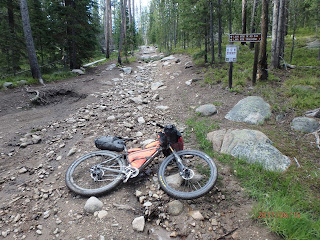 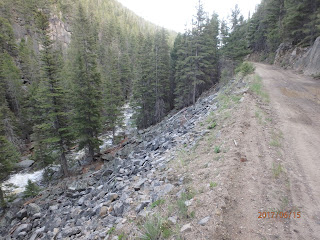 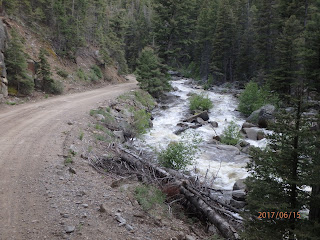 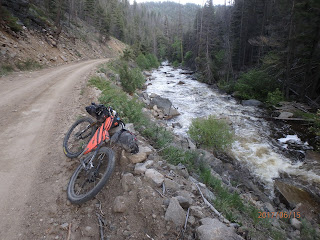