Historically i've been a practitioner of drying out gravel rash as fast as possible.  Some time has passed since my last major off, and the trend seems to now be one of keeping things wet.  My recent Anzac Bridge bingle provided the opportunity to give it a go.  Dropped by the chemist on the way to work, and a stretchy membrane (Opsite-style) was applied immediately to elbow and knee.  Lots of weeping/leaking ensued thoughout the next few days.  In the eve of day 1 another considerably larger membrane, this time with added gauze, was added over the top to catch the mess.  After a week, this outer was replaced by another - soggy scab visible through the inner membrane.  A much better option in my opinion.  After about day 2 zero discomfort, and no morbid picking possible.  Only concession was keeping it out of the shower - body juices only, i decided.  After 2 weeks the whole shebang was removed.  Amzing how the body patches itself up - could barely tell i'd been off, and will certainly be adopting a similar approach for the next one - which will hopefully not be for some time. 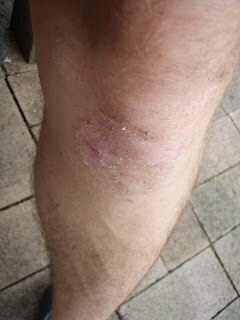 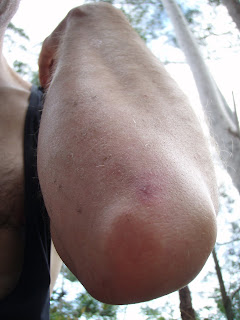