The much anticipated 2010 Mont24 has come and gone. We went down as 2 teams - one full of 24hr veterans ("Sushi Salmon…" (the Salmon brothers) "…and the Wasabi Nostrils" (that would be Lawrence and I), and the other comprised of 24hr virgins ("Green Eggs and Spam"; Jimmy, Sean, Gerard and John). A food theme again seemed appropriate given that much of the downtime at such events consists of eating, slurping, munching and thinking about eating, slurping and munching.

On friday arvo we arrived and erected the tents and tarp (aka The Taj), which was not only to be the focal point for downtime, but would help us should the weather turn nasty. Conditions; mild, although some rain was forecast on the Sat eve. Lawrence, Sean and Jimmy arrived late. Using techniques which must contravene the laws of physics, somehow they had managed to fit three bodies, bikes and sets of gear into the Lee Subaru. We were all mightily impressed.

Saturday arrived, and we assembled machines ready for the start, which this year was delayed for an hour in order to honor the late James Williamson by a lap of a shortened circuit, which most people rode. Ben and I were sporting new machines, Jimmy and John were on borrowed bikes, which took a bit of setting up (thanks Ham for use of the Fish), and GK was having issues with his Fly - we were all quite busy.

As 1 pm approached Jimmy and I positioned ourselves at the back of the field in order to savor the full effect of the traffic, and the equally impressive amount of fine dust kicked up by the start of 545 machines [stats: 545 teams and ~2600 riders]. Suddenly we were underway, and I was relieved to be mostly following wheels towards the less pointy end of the field as I was still getting used to the new bike (having ridden it first only the previous weekend), and am always a bit rusty technique-wise at the start of these things. But come the second lap I felt I was already well slipped into the groove! The track was largely the same as the year before - only a handful of mildly technical bits, although perhaps it was a few minutes longer - as reflected in the lap splits. The rider order for the "Nostrils" was 1-2-3-4 during the light and dusk (ie repeated twice), then 1-2-1-2 -3-4-3-4 during the eve, getting us through the night, before reverting back to the 1-2-3-4 the next morning. This is exactly the way it turned out! Personally this was the most satisfying team event I have participated in. Michael and Ben had improved considerably since last year, Lawrence "off the couch" was still a formidable force, and we all clocked splits not too far off the hour. No one slept in, no one pole-axed themselves, no punctures, and very little dead-time at transition. It was a well lubricated machine that in the end clocked over 400 km and 21 laps of the course in 23 hrs. A very satisfying result, positioning the nostrils in 136th place.

The Spammers were only 4 laps behind - pretty respectable given their collective inexperience and general quality of their machines. I think they all enjoyed the experience and might harbor thoughts - even desires (GK?!) to have another crack in years to come.

As far as my own riding was concerned I felt that I improved on every lap. Muscle got me through the early laps whilst improving technique got me through the latter ones. For the first time I noticed I wasn't being passed by many riders - not something I've encountered before. In fact, on my second (and fastest) lap I was wasn't passed by anyone, and for my remaining 4 laps I was only passed by two or three other riders at most - so hopefully that means i'm improving - more the hunter than the hunted! Part of this must be due to the Anthem (now dialed!) being ~2 kg lighter than the Stump. I'm running lighter wheels and a top-notch groupset. Hopefully the rest is better technique and fitness. In particular I enjoyed the surreal pleasure of the night laps - winding in blinking targets through enchanted forests, then after the pleasantries of the encounter escaping their clutches whilst surfing the twists on a never-ending moon-serpent-path. Ah the romance of the night lap! I can't believe we only get to race this thing once a year. Only thinking about it 10 times a day. Perhaps penning this will help me move on. Anyway, next on the agenda for me, in a little over a month is the Dirtworks 100, where I hope to go under 5 hours for the first time. 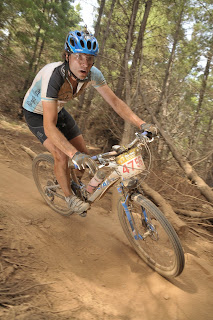