Checking out of Hotel California

Last weekend we headed off to the mountains with great hopes of ticking another of the Pierces Pass mega-routes, Hotel California (22, 370m). The first and hardest pitch is apparently a sandbag, and most people you talk to who've done it simply pull on the draws to get through the crux so as to not be too burned for the 9 pitches of exposure that follow. I felt that my form was good so was even willing to sacrifice my Saturday (! usually my day of rest) in order to make it happen, as the days are rapidly getting shorter now. Anita and I were on our way just after 6 am, and left the car park all kitted up at 8. The rack consisted of 2 ropes, 18 draws, about 18 bolts plates, a handful of emergency cams, and a laden camelback each. We slipped down the mirrorball abseils and were eventually trudging along the bottom of the cliff looking for the start. Two other parties were already well on their way on the other mega-classic of the area, Bunny Bucket Buttress (18). You gotta get up super early to be first on BBB now days.

Even though HC is only another ~400m along the base of the cliff, the approach is not obvious, nor particularly well described, and before long we found ourselves shooting too low round the base of the Amoeba buttress before bashing up a steep and horrendously vegetated and unpleasant slope to gain the start block. This really took it out of both of us. Didn't really get onto the rock proper till ~10:30 - the possibility of this being too late played on my mind. We had head torches, but i didn't really fancy having to use them. Anyway, upward! The crux through the first roof of the first pitch came all too soon. I think I could probably get it if I spent the time to figure it out, and wasn't weighed down by a 1.5 kg camel pack and another 1/2 kilo of cams. After playing for a minute or two I just did as everyone else does and pulled on the draw. A handful of meters later I ran into another problem - a blank sector I just couldn't work out. Yet again I pulled on the draw. This was met by another move a few meters higher which turned out to be absolutely desperate at full stretch to an awkward sustained stance a few meters higher. I was not having a good day - having trouble just reading the line, in spite of the zig-zag of dodgy carrots showing the way. This was far more sustained than I was expecting, and I still had another 20 m to go including another small roof and mantle to claim the first pitch. Mentally defeated I decided that it wasn't going to happen today, and much to Anita's delight (she wasn't nearly as keen as I on the whole thing), I rigged a sacrificial biner at 25 m and rapped back down on one rope, cleaning the route whilst still on belay with the other rope.

Hence began a reverse trudge, but on a different line through the middle of the scrubby Amoeba buttress - a much better option this time - to get to the base of BBB. With the other parties now out of sight, this seemed like the best option for getting out of there. We had last done this route almost exactly 2 years ago. Since then it has had a make over in the form of shiny ring bolts from bottom to top - all 10 pitches (heroic effort from Mr Law). What an awesome route! We had both forgotten what a great climb this is. Not just that it is more moderately graded (3 pitches at 18, and 3 at 17), but the route is in most parts obvious, the climbing varied, the rock clean, and the finale is this incredible 70m vertical jug-laden headwall, which must be some of the best climbing at the grade in the universe. We started at 12 noon, topped out at ~4:20, and were back at the car at ~5. Anita in particularly climbed well, stringing the last two consecutive grade 17 pitches together (double rope drag and all) to punch through the last 45 m of the aforementioned headwall. So, despite the disappointing start to proceedings, a great day was had after all. 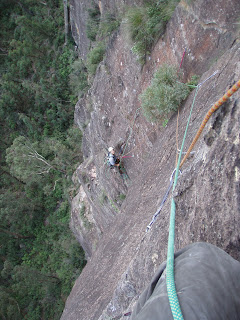 View down to the second pitch belay before the third pitch straightens. 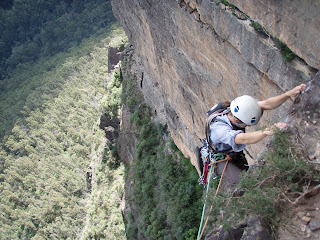 Topping out on the 6th pitch (above). Exposure kicking in. 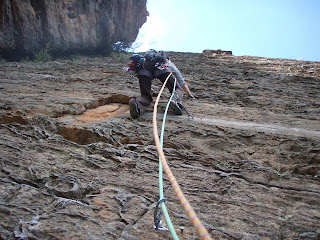 ...and racing up the jugtatsic final headwall 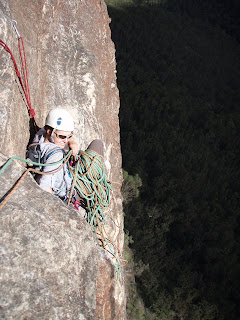 Penultimate belay at the top of the headwall. 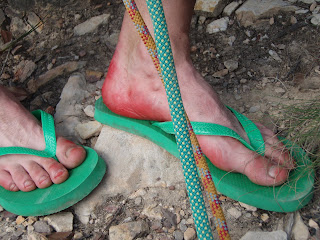 And my feet in South Sydney support mode, courtesy of the running stain from my shoes. 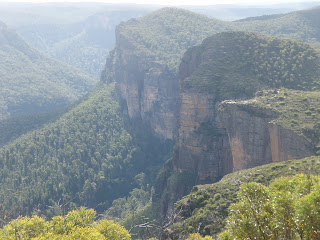 Great views on the walk out. 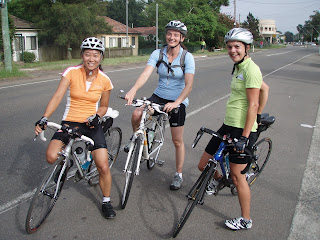 And unrelated, Mel, Suze and Anita clocking up some miles before the three peaks challenge which awaits next weekend.
Posted by langles at Monday, March 01, 2010