Having waited patiently for the appropriate day, it finally dawned - Australia day, no less - and 4 of us (GK, Anita, John and moi) weren't going to let the opportunity slip.

So named because on an early attempt at the m2m7 double a few years ago, Greg, BT, Mike and I encountered conditions akin to walking on the sun. Although only ~115 km in length, and generally flat, the route travels through the warm heart of western Sydney (and by a particularly pungent battery hen farm), which typically attracts temperatures 5-8 degrees warmer than the cooler eastern suburbs. Pleasant in the sense that the entire m7 component is separated from the cars, but unpleasant in the sense that the route is fairly exposed, with little tree cover to provide shade on a hot one - and a hot one it was. We were all creeping over the last hour as we noodled our way back along the unpleasantness of the sizzling m2 with all its reflected heat and dead surface.

Even though the route now sports a watering stop, and the landscaping is finally providing shelter in places, it can still be a hot one in the saddle. With the temp forecast at 38, we tried to get away early, and for the first 1/2 conditions weren't too bad. It was fantastic to see so many people out en route as well - we crossed paths with probably well over 100 other riders. All well and good to the turn around, but with ~40 km to go the cloud cover had finally burnt off and we got a good roasting on the way home. Celebrated with huge volumes of cold iced coffee milks, and a dip in the pool.

John, in particular, made a heroic effort, battling bonk and lower back pain to get to the end - on top of having a tough time on the Oaks trail only a few days earlier - another stinker, in the company of myself and Aaron, a feat which naturally also required a swim at the end. 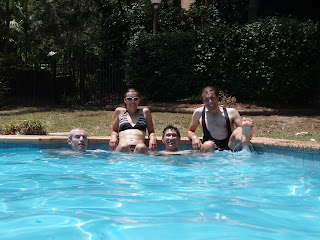 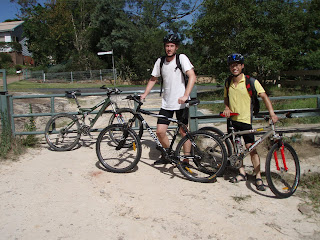 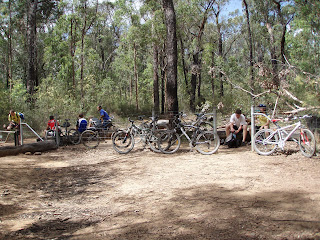 Convergence of riders where the singletrack begins 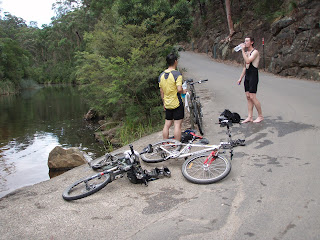 And aqua-relief before the mega climb out of Glenbrook
Posted by langles at Wednesday, January 27, 2010