The first of the mountain-bike events I aimed to do this year, the Mont24, has just come and gone. As its name suggests, it was a 24 hr event (most number of laps over the course, in the shortest amount of time wins) completed as a team of 4 or 6 (no solo riders in this event). The venue was Sparrow Hill, one of the more popular MTB trails near Canberra. As compared to the Mt Stromlo course (brutal), which I've raced twice before (Scott24), the Sparrow Hill course is a gentle gem - predominantly single track but not really too technical anywhere (a more benign version of the Highland Fling, for those in the know). Justifiably popular and perfect for a hardtail or singlespeed.

The Mont24 used to be held in late September, but has been moved forward to avoid clashing with the Scott24. I bumped into Craig at the Scott24 last year, and he suggested I join him for the Mont this year - hence my involvement. Along with Craig and 2 other Canberran natives (Paul and Barney), we became the "Sparrow Smugglers" team of 4. 449 other teams fronted up for this years sold-out event. All up there were about 3000 people camped at the venue, with a maximum of 450 riders on track at any one time. The atmosphere at these MTB events is super - so much more relaxed, fun and friendly than the road scene. Upon mentioning the event to Lawrence and Ben (co-members of the "Wheeled Wombats" at the Scott24), they decided they'd put a team together as well. So along with Ben's brother Michael, and brother-in-law Adam, they formed "Lamb, Tender and Tasty". There seemed to be a healthy number of other carnivores in the event. Other culinary teams present included "Stir-fried Lamb", "Slow-roast Lamb" and "Team Bacon". The vegetarians were represented by "Team Cucumber" and the "Spud Farmers" - not nearly as appetizing! Also represented were the usual descriptors of anatomy, such as the ubiquitous "NumbNuts", as well as "Team Hemorrhoids", the "Bony Butt Brigade", "Lords of their Rings", the "Flaming Prostates" and "My Ass is Bleeding Make it Stop". Other team names that caught my eye - although in some cases i'm not sure why, included; the "Von Trapp Family Singers", the "EPO Flyers", the "Bovine Insemination Team", "Reservoir Cogs", the "Cappuccino Bush Slugs", the "Steam-powered Fighting Aardvarks", "Retirement Village People", the "Bermagui Dirt Surfers", "Six Degrees of Sleep Deprivation", and "Whose Dumbass idea was this". It's that sort of event! But don't be fooled by the names - once on track there are a lot of serious riders out there, and I was one of them.

Lawrence and I drove down Friday pm, and watched, with trepidation, tremendous lightening storms in the direction we were heading. The venue was well soaked by the time we arrived at 10:30 pm. The car almost didn't make it up the sloppy dirt road, and i was not going to be a happy camper if we had to race under similar conditions the following evening. We found the camp Ben had established earlier in the day - complete with Tal Mahal Tarp, but eventually had to resign ourselves to putting the tents up in the rain. Beer nightcap then off to sleep. Fortunately, and despite the persistence of heavy clouds for much of the event, the rain didn't return. Despite the downpour the previous eve, barely a puddle crossed the 18.2 km of track. Somehow the thirsty ground had just soaked it all up. And all that dusty powder in the air that often frequents such events was also nullified. Perfect racing conditions. The only concern was the odd soft corner and slippery tree roots.

With the arrival of 12 noon on the Saturday the race was under way with the usual chaos of a Le Mans start. I was first up for my team, and had a bit of a frustrating time following wheels and trying to avoid the inevitable minor pileups that occur before the field thins out. The Smugglers race strategy (rider order) was to be 1, 2, 3, 4, 1, 2, 3, 4 (approx 1 hr each) which would take us well into dark. Through the deep night we would try 1, 2, 1, 2 then 3, 4, 3, 4, in order to give each of us a decent break. With the return of the sun we would go back to the original order.
The Lamb clan adopted the same starting strategy as us, but had decided to do double laps during the eve. These turned into triple laps when Michael collected a tree and badly corked a thigh.

With the first lap out of the way, my next lap was far more enjoyable, although I felt i was fighting the course, and not letting the bike roll. I managed a 55 min split, but more a result of using brute strength than finesse. The top riders were clocking mid 40s during the day (fastest day lap = 43:13!) and high 40s at night (fastest 46:51). The Smugglers team captain Craig was our strongest rider, clocking 5 sub hour laps (two 53s, a 54, a 55, and a 57). I managed a pair of 55s - my second lap (day) and my last lap on the second day - which relied less on brute strength but more on knowing the course and improved bike handling (I like to think). My knight splits weren't too far behind (1:01, 1:02, and a 1:15 - the latter including changing into bike gear after a last minute order shuffle). Overall i was really happy with my ride. No crashes to speak of, no mechanicals, no incidents - and as the race progressed I warmed to the course more and more. But I still have much to learn about riding the mtb. It's very humbling to be passed by the top riders. I'd be carving the track from corner to corner, alone in the forest, then out of the dark sense someone approaching. They gain on you fast. I'd adjust my line to help them pass, which they do with a "thanks mate", and in about 20 seconds time they are completely out of sight and i'd be alone again, scything through the trees as fast as i'd dare with the whirr of the wheels, squeal of brakes and creaking suspension my only companion.

Of 140 odd teams of 4 males, we placed somewhere in the middle, with 21 laps completed (the winners clocked 31!). Barney and Paul did very commendable rides, given their relative experience and preparation. We only bungled one change when a sleepy head dozed off - but this only cost us ~15 min. Barney also gets a mention for doing the course on a hybrid with skinny tires, and had to contend with a puncture during the night (the teams only mechanical). The Lamb clan had a few more issues to contend with. On top of Michael's corked thigh, Adam cracked a saddle rail, resulting in the saddle tilting badly to one side. A change of saddle ensued, however, on his next foray, about 1/2 way round the course his seat-bolt snapped, leaving him naught but a post for his posterior - nasty! Still, the guys all put in a good effort circulating non-stop the whole way through (Michael even perked up for a pair the following morning) and posted 17 laps. Hanging with the Lamb clan between laps was most enjoyable - lasagna, noodles, salad, beer, tall tales and laughter. For me this was my 3rd and most enjoyable 24 yet.

I'm don't really class myself as a mountain-biker yet, but I seem to bump into more and more people at these events that I know. I'd barely got into the village before a friendly faces appeared. For starters, there was the crew from the Resmed teams I used to ride for - Perry, Rowan and Bart - they wanted to know why you weren't there, Ham! They were lined up next to Parbs (Mr Singlespeed) in the ever present queue for coffee (the Baristas at the coffee vans went round the clock too). On course i passed one of the event photographers i know from the climbing scene (another Dave). At another stage I was slowly bearing down on a rider towards the end of one of my laps. I was just about to make contact when i came round a corner to find him in the process of wiping out. I stopped to check he was OK only to realize it was Richard, another of the Resmed fellows from the past. We had a good laugh before getting under way again. He must have been on a slow lap, as he posted some scorching 50 and 51 min splits! It all finished too soon, and I'm already looking forward to the next event (Dirtworks 100 km, next month) - so maybe i'm becoming a mountain biker after all. 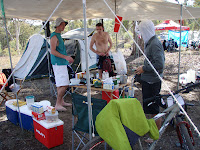 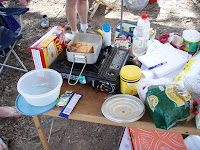 Ask Ben about his stove! 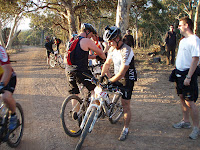 Paul handing over to Craig, with Barney looking on 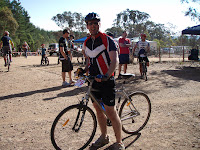 Barney astride his Hybrid 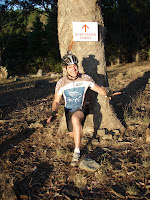 Craig stretching before the handover 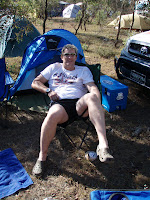 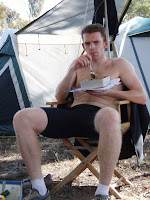 As is Michael...the lasagne went down very well 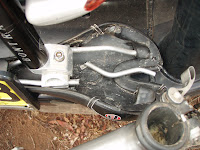 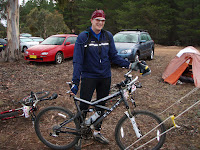 What happens if your seatbolt snaps 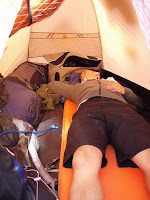 Lawrence after one of his sub-hour splits 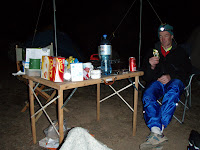 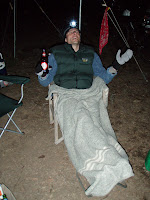 Beer time after my midnight shift