Thursday before the easter weekend was a busy one. After work I headed to Chatswood to pick up my newly serviced MTB. Dropped it home via the new rail-link (impressive), then headed to Rozelle to Ham's old local for a beer, burger and chat with BTi and Gerard. Although I didn't imbibe too much on Thursday eve Friday arrived way too soon. I rendezvoused with my climbing partner for the day, another Dave, at Concord, before driving up to the mighty Bluies. In recent weeks i'd started to feel like a had a little form on the rock, and tee'd up a climb with Dave (who is slightly stronger and bolder than I) hoping to do something a little more out there. But now that it came to the crunch, and having not climbed on rock or plastic for over week, I suddenly wasn't too sure. Perhaps the 24hr race last weekend had sapped thin what little muscles I had? On the drive Dave asked what I wanted to do. I replied that i WAS thinking of something like "Bladderhosen" in the Grose, but before I had time to list all the reasons this might not be a good idea, Dave responded "Great, let's do it!"

Bladderhosen is a 4-star Claw route at Pierces Pass, with pitches of 21, 21 and 23 (>100 m). I should be able to climb 21 comfortably, but 23 is right on my limit - even seconding, as demonstrated by my less-than-elegant cleaning of a 23 recently at Wave Wall. But I'd heard through the grape vine that the grades were a little soft (as with some of the other multi-pitch routes I've done at Pierces), and as Mikl generally equips his routes fairly well these days, I was reasonably confident that we'd get up and off it without killing ourselves. Mr Hemmings kindly offered to climb the first and 3rd pitches if I looked after the second. Deal! After an approx 45 min bash, we found ourselves at the base of the route - towering above us and looking like a big choss pile. Fortunately, the rock turned out to be pretty solid. The first pitch had sharp large-grain features, with a definite crux low on the arete. The second meandered across nice orange rock with the crux 3/4 up. With that dispensed with, the overhanging 3rd pitch (45 m at grade 23) loomed, including a conspicuous flake hanging about 20 meters directly above. According to the guide, one nervously examines this flake, before jumping onto it! Dave led through without too much fuss and in no time was yarding up the impressively dodgy-looking feature. Unfortunately, Dave bungled a clip due to rope drag, and decided to exercise caution in sorting it out, with a brief sit on the rope, but finished the route with no problems. I was next, and after sampling the delights of the wafer-thin flake was soon puffing my way to glory up the final headwall, which is pretty sustained all the way to the rings at the top. Fantastic moves, holds and position! Unfortunately, the best way off was to abseil back down the line - a somewhat terrifying option as the 3rd pitch is quite overhung. By the time I got level with the top of the second pitch I still had 55 m of space under me and I was about 5 m from the face and anchors - which I gained by pulling on the line we'd left tied off to the 2nd pitch belay. Another 55 m abseil and we were on the deck. Great experience! Will have to psyche myself up for "Smegadeath" now - a 5 star 23 not far away which is a more serious undertaking.

The follow day (Saturday), Gerard finally got to do the Andersons-Oaks double, in spite of clouds which looked continuously threatening. By the time we reached the Woodford turnoff (our bail-out option), there was even dry bitumen, so there was no question of not doing the whole shebang this time. My freshly serviced Stumpjumper was simply beautiful to ride (as claimed by Chookman at Northside). The creaks which have annoyed me for about a year now are a thing of the past. At the head of the Andersons trail we got passed by an Ambo and two police vehicles. 7 km later, the "locked gate" at the Andersons turnoff was unlocked, so we assumed that some poor sucker had lost it on the descent - kindly reminder for us to take it easy after Lawrence went head over heals there some weeks ago. By the time we got to the descent a helicopter was also in the mix, working out how to evacuate the victim, who had actually crashed before the main descent horrors begin. Anyway, with caution we made it to the traditional picnic spot at Bedford Creek, but GK was in no mood for stopping, citing that if he did he might not start again. So onward up the climb we went, finally lunching at the head of the Oaks trail. As always, the Oaks is a cruise after the long bash out of Bedford creek. 6 hours car to car! GK going great guns at the moment and should be ready for the extensive riding he will be doing in Europe during the northern summer.

The Sunday forecast was not a rosy one, so Anita and I met up with Neil for a spot of indoor climbing at St Peters followed by a lazy King St lunch. That evening I stayed up for Paris-Roubaix, which was an absolute cracker this year. Whilst Boonen was supreme methinks that young Haussler might be a strong contender in years to come, although it's hard to conceive him having a better season than present. Should have been more attentive and struck whilst the iron was hot! Monday was a day for 3 valleys and burnt coffee for Anita and I (3:15 from home to the Cafe), somehow avoiding the rain which came with gusto in the afternoon whilst I played in the garden......which brings me back to the reality and drudgery of another day at the office. Better get back to it! 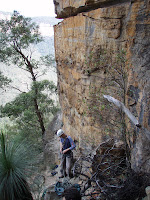 Dave at the base of Bladderhosen 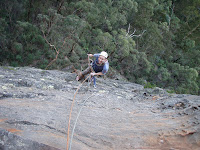 At the first pitch belay 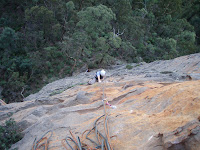 High on the second pitch. Another party is behind us. 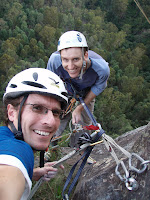 At the top before the big rappel 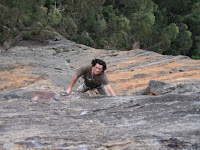 Justin from Wollongong cruising an overlap on the 3rd pitch and contemplating the final headwall. 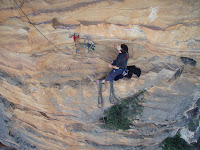 The second pitch belay, as viewed from orbit 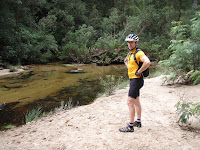 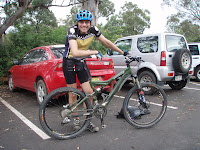 Langles with the new silent stumpy.
Posted by langles at Tuesday, April 14, 2009