A party the night before was followed by a refreshing dip in the ocean at Bronte, before heading up to Katoomba for an afternoon climb at Boars Head, just west of the Narrowneck peninsular. Dirty Rotten Pig was another multipitch sport route recommended to me by a Katoomba local whilst climbing at Boyce a few months ago. Only the access for this one was a little more interesting than most. Although the cliff is only a few hundred meters from the car, the descent involves 4 abseils (although two of these can be combined). The first abseil drops you into the gulley separating the Boars head massif from the main cliff line. A short sidle on an ever narrowing ledge has you traversing almost 2/3 rds of the way around a buttress – in fact into the chimney formed between this buttress and the next, and out the other side, all with a tremendous drop between your feet down a chimney on par with the Darkside chimney behind Mirrorball pinnacle at Pierces Pass (NB: if desired this traverse can be led on rings which periodically adorn the traverse). Three abseils later (all off obvious chains) we emerged at the bottom of the chimney and skirted another narrow edge to the base of the route (the true bottom being still way down yonder).

The start, as it often is on these multi-pitch sport routes, was a little goey (questionable footholds), but in no time I was scooting up what turned out to be a lovely pitch and probably the best of the climb. 40 m of well protected (all U’s) generally solid rock with varied and interesting climbing. The crux was at about 30 meters where impending steepness is negotiated by pulling on a hollow flake through to good jugs and an easier finish to a triple U belay.

Anita led the next pitch (also 19) which first involved gaining the arête not too far to the left. Once gained it was sobering to realise that the façade of good rock on our wall was hiding a massive orange chalky chossmonster interior on the other side of the wedge, which one gets only a brief glimpse of on the first pitch (the rotten core of the Dirty Rotten Pig). Anita moved back right onto the main face, as dictated by the line of rings, and was about 4 bolts up when off she came! A handhold on an already relatively blank section had given way. Once again, I think Anita ended up leading the most difficult pitch of the climb – involving a relatively blank section with smaller sloppier holds and more coarsely grained rock. I was fortunate to be able to use my go-go-langles reach to negotiate this section, but the brief insecurity I experienced unsettled me as I finished the pitch, nervously selecting which iron-stone edges and plates were worthy of trust (get in while it’s still 19). Regained my mojo on the next pitch (only grade 15), the crux of which was really just choosing which ironstone plates to trust. Didn’t beak any, but it is reassuring to know that the entire route is ring bolted should you break something off and get some air time. Having gained the summit of the main wall, a short meander on more narrow ledges got us back to the base of the first abseil where a short grade 14 pitch (3 U’s, actually pretty full-on and slopey for 14!) got us back to terra firma proper. Car to car ~ 4 hrs 20 min. Overall, a nice adventure up a very impressive headwall which is "cleaning up nicely" (not too much loose stuff). 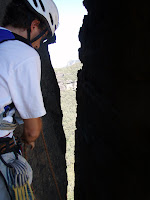 In the middle of the monster chimney 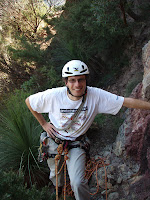 finally, the base of the climb is attained 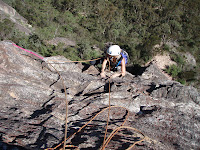 Anita near the end of the first pitch 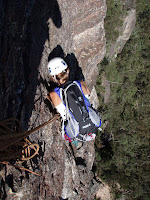 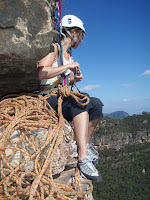 At the second pitch belay 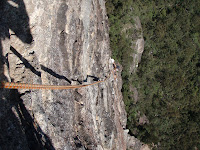 mid 3rd pitch, looking down the route, which is steep, but on generally huge jugs 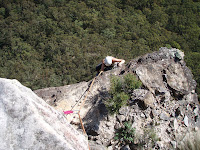 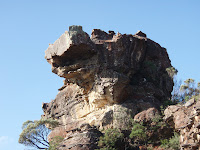 The Boar's head, although we thought it more like a Hippo 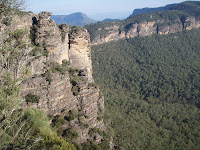 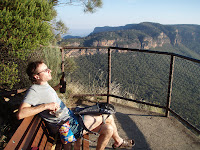