Having been to the Freezer a few times this year, and periodically gazed across to the majestic walls of the County, it was inevitable that I should make the effort to return to what used to be (about 15 years ago) my favorite crag. Not exactly sure why I have given it a wide berth for such a long time – probably a combination of access (now quite a hike) and my memory of sustained crimping on wafer thin holds which would have surely all been dislodged during the intervening years. In short, I was scared that I wouldn’t be able to climb anything there any more – well, the thin grade 21 walls in particular that I used to like so much.

I needn’t have been nervous – the routes are still there, and all the holds too (mostly). Had an awesome day – can’t believe it took so long. We started on the 80 minute hour (18), which Anita led without much fuss. Much more enjoyable than I remember, although we both avoided the bouldery start – which now looks more like 23 (I think a few more edges have disappeared). Next on the menu was Clip or Die (21), a lovely climb on the awesome main wall with a hard traverse finish that I have always struggled to get through. This time however, I seemed to have the wood on it, and did it the easiest I can remember. It’s amazing to think that all those amazing fine-ironstone crimpers and incuts are still attached to the main wall – just a joy to climb. Hadn’t quite had my fill of these, so launched up Colditz next (21), which I was expecting to be sharper, but wasn’t too bad this time. Must be climbing OK. After lunch, Anita got the sharp end of Exploding Zombies (20), which is actually quite sustained in places, and perhaps should also be graded 21 (in keeping with the theme of the main wall). With one climb left in me I decided to give “Build a better mousetrap” a go (22). I have got this on second (just) previously, so was keen to see if it had become any easier, now that I seem to have a bit of form, and because for some reason it has been downgraded from 23 to 22 (surely that makes it easier!). Not so. Unfortunately had to have a couple of hangs to work out how to negotiate the crux, and I got spat off a little higher where the route turns into a pump on what were now tired and worn tips. Anita threatened to do to me what I used to do to Neil (get a climb clean on second that he had rested on during lead), cleaning through the crux without issue, but came a cropper higher up in the pump section, where a reach problem (reachy for me) turned the route into a substantially harder prospect for a short Mudge. She eventually got it, and we bailed as the sun was just about to dip past the horizon. We left behind a group of 4, one of which was being rescued high up on “I’d rather be sailing” (19) – a victim of poor pro (still), massive fall potential, and shot nerves. So keep that in mind if you find yourself taken with this fine line. 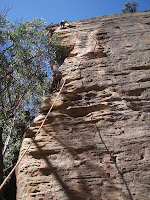 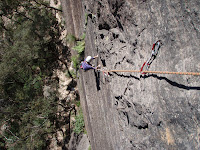 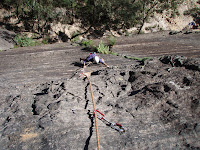 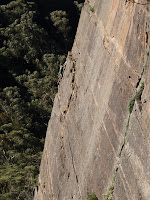