The week before Xmas was punctuated by the arrival of Karel from the Czech Republic, along with one of his good friends, Cody. They would be staying in Oz for a month to escape the northern winter and, as it turned out, cram in as much activity as is humanly possible before their departure. The small welcome BBQ thrown in their honor backfired on account of not only persistent rain, but a phone call mid-way through from an apologetic Karel (in Korea) confirming a mix-up with the arrival dates.

Whilst I spent the following week drifting from work party to work party, the Czech boys had their own agenda - catching up with many of Karel’s friends, almost exclusively via riding the bikes they brought with them. On most days they were clocking up 100 km. Karel brought with him the trusty aluminium mtb shod with slicks he used in Europe, whilst Cody was equipped with the “Rock Machine”, a hybrid tourer out of the dark ages – TIG-welded steel tubing, no suspension, road wheels with inch tyres, which weighed in at about 17 kg including pannier rack and kick stand. Bloody hell! Undeterred, Cody put in a solid effort on a group ride of the 3 valleys.
Not content to spend Xmas day on the beach (part of my plan, foiled by the coldest Sydney Xmas day in memory), Karel and Cody headed off on their own grand adventure. Their aim was to catch the train to Blackheath (no trains boxing day), descent into the Jamieson Valley, ride the 6-foot track to Jenolan Caves, climb to the Kanangra plateau, pick up the Uni Rover trail, and gradually work their way south via bush and (eventually) back country roads to first Goulburn and then Canberra, over 5 days, where I would meet them after attending Jeremy and Claire’s wedding. I must admit, as they stood outside my house in the drizzle with bikes that could barely be lifted, I had my doubts as to whether they would go the distance – especially the Rock Machine which I was certain was headed for some sort of major mechanical incident, hopefully not involving a fast descent on a rocky track.

I needn’t have worried. On the morning of my departure to Canberra (29th) Karel phoned to say they were both doing well, had enjoyed endearing themselves with the locals, were already in Canberra, and were going to push on to Thredbo, our ultimate destination. As it turned out, they only made it as far as Cooma, but not for lack of trying. Karel’s bike suffered a rim failure, the result of grit encrusted brake pads eventually wearing the rim wall thin – an occupational hazard for non-disc brake mtbs. Onward to Thredbo! 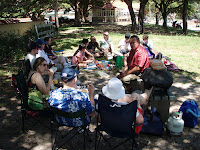 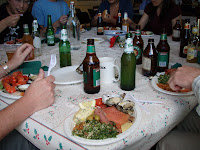 Another good spread at the MMB Xmas party 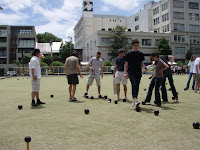 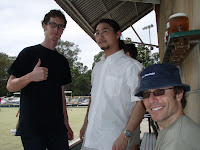 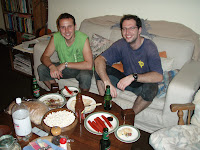 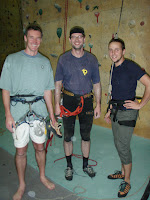 At St Peters with Ben 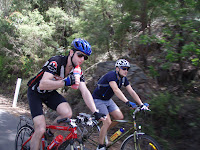 Karel, Cody (and Rock Machine) on the 3 valleys 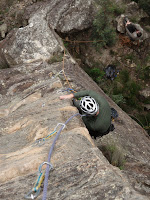 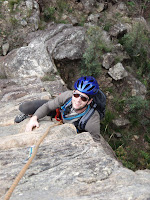 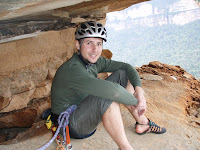 Cody in the cheesecake - top of the second pitch 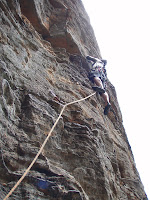 Karel in orbit on the 3rd pitch 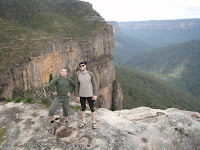 The boys at Walls Lookdown, with the mirrorball pinnacle and face behind them 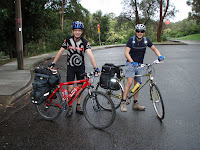 Xmas day - loaded and ready, the boys set off
Posted by langles at Monday, January 14, 2008