This was the last of the three endurance MTB events I had signed up to do this year. My partner in crime for the event was Lawrence (Mr Spin Spin) Lee. The event attracted a field of 1300, 1200 who actually started. Presumably the 100 no-shows were scared off by the solid week of rain which preceded race day. Lawrence and I somehow managed to squeeze 2 MTBs plus camping gear into the back of his VW Polo, and drove down the evening before, pitched a tent on soft turf at the pony club, before riding to the town center of Bundanoon for beer and registration.

After a good nights kip we awoke to a lovely clear morning – a huge relief – and the infectious groove of reggae filtering across the campground. The place was abuzz as a thousand people downed breakfast, queued for the morning constitutional, queued for the other morning constitutional (coffee), and readied for the 7:30 start. About 650 were signed up for the 110 km event, which was split into three different segments of approx 28, 55 and 28 km.

Seeing as I’m new to this game, I decided not to get involved in any argy-bargy at the head of affairs, and started towards the back of the pack. Even so, I got separated from Lawrence almost immediately, and didn’t see him again till the finish line. The first ½ of the first leg, which involved a few waist deep stream crossings, went at quite a comfortable pace, mostly following wheels through technical eucalypt forest, across paddocks and along fire trails, where I did most of my passing. After about 20 km the field around me had thinned sufficiently to give it a bit more stick. At the end of the first sector I drank a bottle, downed a cake, and waited to see if Lawrence would show, before heading into sector 2.

Sector 2 was long and technical, alternating predominantly between short stretches of fire trail and long convoluted sections of singletrack. I’m glad I started well back in the field, because on the long singletrack segments I struggled not to hold up generally less fit but more skilled riders. There were a few technical descents but, on the whole, the course was a walk in the park compared to the horrors of Dirtworks. One descent in particular was akin to a mud slide. Once committed, there was no way I could even stop if I’d needed to – it was just a matter of steering (or skiing) through a smattering of saplings in order to gain the good track again. These bikes are truly amazing machines – somehow they slide where you point them! I succumbed to walking more technical hills than I would have ordinarily surrendered to, but saved a bit of energy in doing so. The 50-70 km segment was a real struggle, in spite of a 55 km banana stop, and I was very relieved to hit the good dirt road leading back to the changeover for the 3rd sector at approx km 87.

Fortunately, the last sector was relatively kind, mostly on reasonable quality dirt roads. Unfortunately I punctured early on. Despite using a gas cylinder for inflation, the whole rigmarole still took me about 5 min. The trail even took us past “the yacht club” – one of the most bizarre things I’ve ever seen anywhere (the shell of a ~40 foot yacht, lying tranquil on its side in the middle of dense trees). The last 10 km was an issue of managing cramp which had been increasingly creeping up on me, but I managed to nurse a pretty shattered body to the finish line in a grand time of 6 hrs 20 min, placing me about 110th. Fortunately, Lawrence wasn’t too far behind (I kind of talked him into doing it on little specific preparation, so was feeling a little guilty), although, like others before him on hardtails (not mentioning any names Ham), he suffered the indignity of – you guessed it – a busted arse. BTW, the winner clocked about 4 hrs 20 min (incredible).

Overall, A really good event on a super course! Another one I’ll be back for, although I’m going to have to work on my single-track technique. 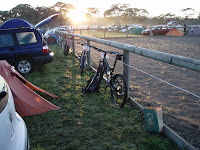 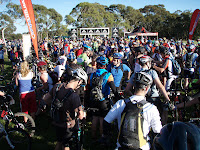 Chaos at the start 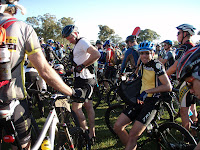 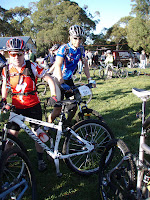 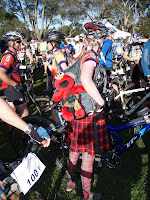 Even Elmo was here - in kilt! 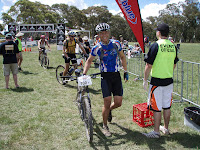 Lawrence at the finish 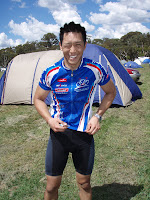 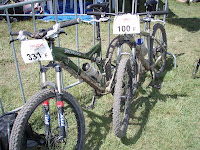 Lawrence is gamer than I am!
(my excuse - i'd only just punctured during which I'd also oiled my chain - am i'm i bit of puss when it comes to river crossings)

Some of the crossings were too deep/long to ride. This one was waist deep. Thanks to Rob Parbery for this photo.
Posted by langles at Monday, November 19, 2007