Rode home last Thursday eve after a massive thunderstorm rolled through Sydney.  First rain we’ve had for some time.  Trundled over the SHB as usual, and as usual wiggled round the barrier at the northern end to line up for the ramps between the stairs.  It’s probably been years since I have not ridden the ramps.  Once I figured out how to do it (significant fear factor that first time) it became habitual and routine, even if there is a sea of people using one edge or the other to roll their bikes.  “Coming through” usually parts the waters comfortably.

I’ve had rear wheel skid issues before on a damp track, but nothing I couldn’t control.  This time, however, turned out to be quite different.  I’d feathered the brakes for several hundred meters on approach to dry off the rims, but the extent of the wetness of the concrete surface was something I hadn’t quite appreciated.  By the time I got to the bottom of the first ramp, with the rear wheel having just lost some traction, I knew this time was going to be different.  I skidded at least half of the second ramp, and the little flat spots between ramps were no-where near long enough to scrub off speed.  Like Mulga Bill I was in for a wild ride.  The final three ramps were basically continuous slide fest, each one faster than the last.  I had picked my line (straight down the middle – fortunately there was no traffic), now it was just a matter of hanging on – akin to riding a gnarly chute on the mtb (wherever the front wheel goes, the rest will follow).  The compression of the intervening flat spots somehow allowed the rear wheel to re-align before the next ramp skewed it sideways.  A commuter at the bottom who was witnessing the impending catastrophe had the presence of mind to step aside just in time, allowing me to shoot off the bottom out onto the road.

Wow that was close.  I couldn’t believe what I had gotten away with.  Losing it on the stairs doesn’t bear thinking about.  What an idiot I’d been.  Talk about lucky.  I reflected on this as I gingerly trundled up the sopping road to the Milson’s Point roundabout.  An approaching car even slowed to a complete stop to let me take the RH corner nice and slow.  Next thing I know I’m on my side with the bike sliding away from me on the off-camber corner.  Bugger!  Ripped a massive hole in my new knicks as well.  Reminded me of the Cervelo/Bobbo/bilge incident of a few  (6!) years ago.  Swings and roundabouts I guess, or have I just intersected karma?  Despite a few inches of bark off the hip and elbow, I still reckon I got off lightly.  Hopefully this doesn’t mean there is more to come.

Lesson learnt (stairs are sometimes your friend).  Spent Saturday down at Stromlo with Ben working out how to ride parts of the Scott24hr course.  Hopefully this constitutes prudent adherence to the 7 Ps and will ensure a trouble-free run in early October. 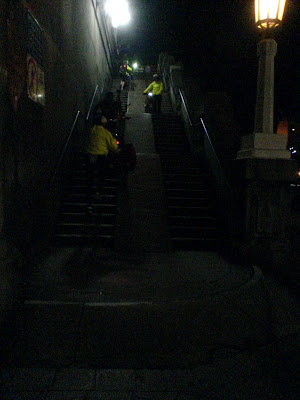