A km too far

How much can we or should we expect out of a carbon frame? Well, the answer to that question, at least in the case of my el cheapo ~ 3 1/2 year-old Cellnago, is approx 40 000 km, although this finality was realised by Iain (aka E), the metaphorical straw that broke the camel’s back. The bike i loved to hate, is finally kaput, but perhaps not for reasons one might have expected.

Due to a concoction of Chinese beaurocracy, painting issues, and life just being plain busy, the rolling out of the Wombat took 6 months more than expected, the result being that the Cellnago had done over 41 000 km before i had finished with it. Technically, this was only true for the front fork (original), whilst the current frame had done 25 000. Frame #1 developed fractures in the lacquer in the bottom bracket area after 15 000, although in light of my recent experience with the idiosyncrasies of clearcoating, i wonder whether the fracture pattern was really a hint of imminent failure, or merely a skin-deep cosmetic issue.

In any case, E had expressed an interest in using bike #2 once i’d moved on. My main concern was the fork and what condition it might now be in. The carbon blades were basically unscratched and good as new to the eye, despite its first and only bingle experienced just months earlier. My research on the subject revealed that the properties of carbon are such that barring extreme or catastrophic impact (ie. often resulting in breakage), carbon actually has an extremely good fatigue life – like steel but unlike aluminium, which has no fatigue limit. What this means is that an aluminium structure will accumulate fatigue regardless of the magnitude of the stresses involved (eventually accruing to failure), whilst steel and carbon will only accrue fatigue if a particular threshold stress is achieved.

I had pre-emptively acquired a replacement fork with aluminium steerer from ebay (approx $100), should another park-bench style incident befall one of us, and offered to install it for E before handing it over. However, E was either unfazed or sufficiently accepting of my qualification that the fork was probably OK, at least for the time being whilst he got his new bike sorted (another cleanskin in the works), that this new fork was never installed.

And so a few weeks rolled by until the unimaginable happened one morning this week on his commute to work. Actually, this was the second unimaginable occurrence to have occurred last week.


Incident and get-out-of-jail award #1 goes to Lawrence, who upon clearing the dip (60 km/hr) of the Kirribili Exit off the freeway (heading to the SHB), and having just lost most of his momentum, hit a normally innocuous ripple in the surface only to have a catastrophic front hub failure. Three consecutive spokes parted from the hub taking the hub flange with them, with the warped-rim locking the front wheel. Not mentioning any names (campag, radially laced, aluminium hub body, probably at least 5 years old). Bloody lucky that boy had no speed when it happened.


Now to the second get-out-of-jail card. E was out of the saddle and heaving up a steep bike-path incline (ironically en route to meet Lawrence, who was now waiting on his MBT) when the handlebars sheered clean off the fork! It wasn’t the carbon fork blades, but the aluminium steerer tube of the fork that had sheared at the stem collar. Again, lucky he had no speed to speak of. Inspection of the fissure revealed that 1/3 had probably started to open some time ago – a straight line corresponding to wear instigated most likely by the edge of the stem, with the newly peeled surface constituting the other 2/3. In hindsight, the headset had mysteriously loosened up about a month before the handover, so perhaps the initial crack had started to open then. The fact that these things happened just days apart is slightly creepy. Hopefully these things don’t happen in threes.

In answer to the question posed at the top – I reckon 3-4 years or 30 000 km is probably a reasonable life to expect out of a frame – at least that is the rule of thumb i think i’ll ride by (@ ~ 70 kg). A lighter rider will get away with more. Frequent inspection of the steerer tube is probably a good idea also, especially if carbon (look for cracks). Similar lifespan probably a good idea for wheels as well (maybe 5 years max), especially if you are running less than 32 spokes and have radial lacing patters (= higher spoke tension). If you must true the wheel yourself, try to do so by releasing tension, rather than increasing it, although a gentle uniform increase can be done if the overall tension is getting sloppy, which also tends to occur with age.

Good news story of the week; Jonesy – who is the most prolific of any rider i have had the pleasure of knowing, and who is himself a chronic flog-it-till-it-dies advocate (or at least used to be) – just became a world record holder . 491 km in 12 hrs at nearly a 41 km/hr average. Amazing ride Jeff! 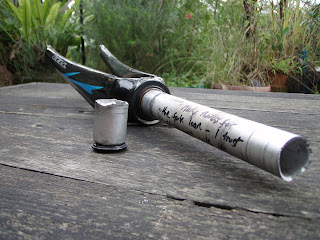 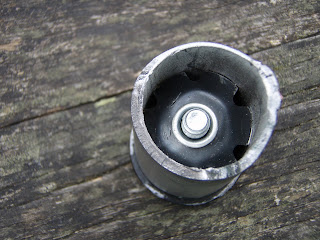