Split Enz; “History, never repeats, i tell myself, before i go to sleep”

The lyrics to this song were whistling through my head as i nervously kept my place in the collective armada of cyclists filing down the Falls Creek descent with the intensity of rain getting harder and harder. Surely the horrors of last year’s weather couldn’t happen again. By the time I was ½ way up the drag to Harrietville – heavy rain above, and horizontal hosing from wheels in front – i couldn’t help but grimace at the possibility that GOD, whom i typically ignore or don’t believe in, was yet again having the final word.

This year we were an ensemble of 6 lined up in a field of approx 1200 tackling the 3peaks alpine cyclosportif-style event, held for the first time in abominable conditions in 2010. Last year I rolled around the 235 km course, with approx 4300 m of alt gain (seems to be consensus) in about 12 hours, very close to hypothermia, but nevertheless determined to do it one more time in the dry. The lead up for some of us had been ideal. For 6-8 weeks prior Ham, Anita, GK and i had managed 100 plus km rides on most weekends. Preparation for Kev and Chris, however had been punctured by a month of overseas travel, so these guys were effectively doing it “off the couch”, although being big strong lads i was sure they would get there in the end if they paced themselves and saved something for that last mo........er of a climb.

Ham, Anita and I were the last to arrive at Koki lodge, where after registering and getting bikes fitted with transponders etc we all gathered for a great lasagne extravaganza supplied by Chris and Mon. Although morning dawned without driving rain this time, fog reduced outside visibility to about 10 meters as Anita slipped down the street in the dark, lights blazing, for her 6:45 am start. The rest of us had a 7:10 start slot. Although the road was wet on the start, the lack of precipitation was a good sign – although this is how things started last year as well.

I’m a nervous descender in the wet, so was happy not to push things as the pitta-patter become patter patter. Too much coffee prompted my first stop, with Ham filing past with a “go Dave”. All around people were donning capes, but they’d be taking them off again on the approaching Tawonga Gap climb. I was now last on the road from our group, with the rain intensity oscillating as the bends and kms ticked by. At approx 8:10 i bottomed out at Mt Beaty, and was soon on the 6 km Tawonga climb, where I caught Ham, and also passed GK who was sidelined with a puncture (now if he’d opted for sensible wheels...). I like the Tawonga climb and ticked out a good rhythm where i wasn’t passed. I zipped up the gillet and slipped down the other side on drying roads, but by the time i bottomed out at Germantown the rain was in full force again. No one in the bunch i ended up in particularly wanted to work, or even rotate turns, so i resigned myself to being patient as we crawled up the valley road towards Harrietville, where i stopped to fill bottles (and have another pee). I was on the Hotham climb at 9:45 and after the steep opening ramps found my tempo for the 30 km slog, during which I was only passed by one other rider (i’m getting better at this climbing caper). I passed Kev about 1/3 of the way up, Anita about 10 km from the top, and Chris about 1 km from the top. Conditions on the climb were much more pleasant than last year as the rain had largely stopped and there was little wind. However visibility for the last half was literally only about 10 m, so if you didn’t know the climb, which is like a big horse-shoe, you’d really have no idea where you were on the mountain. The “white-out” conditions made the short stabbing descents which punctuate the top almost un-navigable. I’d forgotten how many of these there were until the tunnel materialised in front of me and I realised that i was in fact on the descent proper. Just off the back the cloud lifted and Chris picked me up as we headed for Dinner plain.

Something about my bike was feeling squishy – turned out to be the front wheel, so i stopped to change the tube and hoped i’d see Chris again at the Dinner Plain food stop. The change of tube went efficiently, aided by a guy who jumped out of a TFM van with tack pump in tow. I was off again and found Chris who was downing sandwich and pasta salad at Dinner Plain. I probably stopped at Dinner Plain for 20 min, during which time Kev rolled in, followed shortly by Anita. Kev made short work of the feed and was soon ready to roll back out on course with Chris and I. Anita was cold, wet, and making sounds of pulling out, although this would be decided post coffee, so i left the decision with her and departed. There are some great fast downhill runs between Dinner Plain and Omeo, and it was a real joy to milk them in the company of Chris and Kev, both big units who know how to ride fast. Both rain and clouds had cleared by this stage, the air was pleasantly warm, and soggy clothing had dried. Life was good. There are also some uphill drags and climbs on this stretch, which typically one ignores when looking at the profile – bigger than you might expect.

Having hit the Omeo transition I was itching to keep the momentum going, so kept my stop brief and pushed on, picking up the odd rider here and there. The long drag out of Omeo gets you to the fantastic hill-hugging flat sector which scythes its way to Anglers Rest. Once again, this was my favourite part of the course, and I was able to give it some stick, but not too much, as I knew what was ahead. Re-filled a bottle at Anglers and then headed gingerly towards the base of the 3rd, last and worst of the climbs, which one hits at exactly the 200 km mark. Comments on the Cycling Tips blog reported people using tactics of throwing up, falling over, and crying, in negotiating the unrelenting 8% drag. This climb is a beast.

As Winston says, “When you are going through hell, keep going”. Like gaining the top of Hotham in the fog, it really is hard to know when you have finished this mofo. It’s not really over till you see the lake below you which sits above Falls Creek village, in the knowledge that in about 10 clicks you’ll be home. Although the weather was coming in again, I was going to beat it. Freshly sealed just before last years event, the last 30 km delivered hundreds of punctures. A year on the surface was more settled, and I fortunately made it home without incident, having been passed by just one rider since Omeo, rolling home in 9:58, just inside the 10 hrs i’d hoped for. I was pretty exhausted, but in far better shape than last year. [I’m guessing i’m still reaping the benefits of last years mtb efforts as i was one of only 40 to go under 10 hrs. Incidentally, fastest time this year of 8’10’’!] As I enjoyed a second or third cup of hot tea in the finishers enclosure Kev walked in, only 15 min behind me. Amazing ride given his disrupted buildup. Chris was next, probably only 10 min further adrift, proclaiming it the hardest thing he’d ever done. Back at the lodge, GK was next to clip clop through the door – only 45 min behind and 3 hrs quicker than last year. By this time the rain had returned with a vengeance, and i was concerned that Anita (whom GK had seem at Dinner Plain and encouraged to continue) and Ham were both out in it. But around the 7 pm mark both of them filed in, one after the other, cheery, and relieved that it was all over (top 20 women for the Mudge!).

We had done it. A great team effort. 6 riders departed, and 6 returned safely from a gruelling course and conditions. Although not as nasty as last year (2 bad halves vs the one bad half this year), the conditions were far from trivial or safe, so well done all. The much anticipated pub dinner turned out to be a bit of a fizzer thanks to a bewildering fixed menu (no chips or steaks!?). In contrast, i thought the Swedish breakfast the next morning at Mt Beauty was A-grade (Baked beans were Fab, although perhaps they do need to work on the cooking of eggs).

Ham has already expressed ambitions for next year, so i’ll let him instigate the mustering for 3peaks 2012, which according to my long distance forecast, is sure to be a cracker 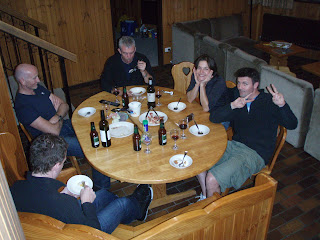 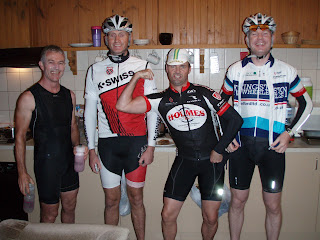 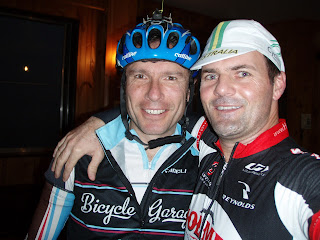 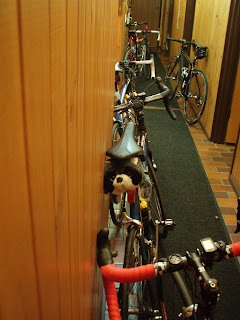 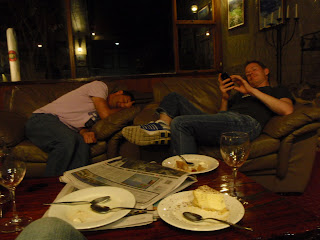 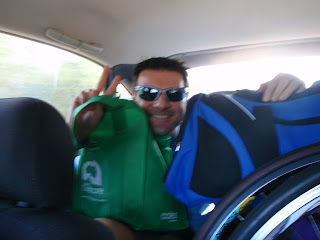