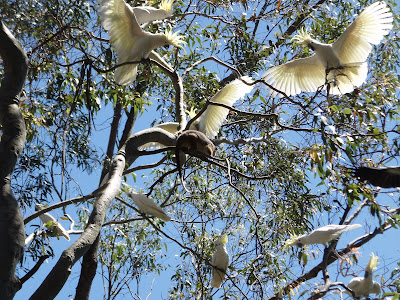 A few weekends ago i returned from a ride to find a commotion in the backyard. A Ringtail Possum had somehow not found his/her way home the previous eve, but had instead been found by a gang of Sulfur Crested Cockatoos who, like a bunch of teenagers, made their displeasure known to the poor little fellow. Boy those things can make a racket. The Maggies joined in as well. Attempts to escape to a bushier neighbouring tree were met with screeching and the occasional nip to the tail. Poss did eventually escape...with his tail in tact, and an experience that hopefully won't go forgotten.

One of Poss's bids for freedom
Posted by langles at Friday, November 05, 2010