Finally some rain, which we desperately needed, but not perfect timing for the long weekend before the 24. My riding has been consistent, which is good, with a month of 300+ km/wk under my belt, but this weekend beckoned as the last chance for some serious miles before a week of fattening-up leads into the 24 next weekend. Two weekends ago Joel and I did the Andersons/Oaks double in 5:40 for the 93 km highway/double-trail loop (my default harden the FU ride before mtb events). The highway bit was tough due to a ferocious headwind. Although mega-fit from running, Joel struggled a little on the bike, which he only rarely throws a leg over, but otherwise put in a sterling effort.

Last weekend I was intending to do the trail again, but with the twist of going up the Oaks first, but heavy rain put an end to that. In the Glenbrook car park I resigned myself to only doing the Oaks loop, but upon arriving at the Oaks turnoff the rain had ceased sufficiently to entice me further up the Hwy. By the time I got to the Lawson Bakery the rain was hammering. Either way from here was going to be cold wet and miserable, so I woofed down a pie and headed up the last bit of highway to the Wentworth Falls turnoff at 850m altitude. Having got there (visibility 10 m, temp < 10 C)) I was a little worried as not only was I soaked to the skin but my hands were now numb to the point where changing gear was near impossible, and even breaking was inducing cramping in my right hand - no good when you need to let the front break off again! I decided to commit to the trail, as at least in the bush I wasn't going to get run over by a truck, or freeze to death waiting for a train. I was banking on warming up once I lost some altitude - which fortunately was the case, and I worked out how to change gears using the palms of my hands. Well down the trail now I started to warm up, regained the use of my fingers, and was finally able to turn on the gas - Andersons is a great trail to ride hard! Negotiated the final descents gingerly, and in no time was nice and warm on the big climb out of Bedford creek. The "trick" of using electrolyte in my bottle was also paying dividends (no cramping to speak of - a no brainer for most people). I had been following a pair of tracks for most of the ride (another pair of desperadoes), and eventually caught these guys at the Oaks trail-head. Blasted the Oaks and was back at the car in 5':03" - easily a record for me, and in spite of the poor conditions.

A mega-clean of Old Stump followed (before getting drenched again on the Monday - but that's another story), including new rear pads and new rear tyre. Incidently, since going tubeless (just before the Scott24 last year) I have been riding the same tires and still not suffered a puncture - amazing given some of the terrain. I counted 9 bleed points in the old rear tyre which have all been sealed by "Stans solution" sloshing around inside. That's 9 punctures I would have otherwise had to fix along the way. So, if you are considering getting into mtbs, tubeless is the only way to go. 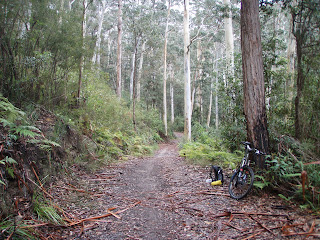