The last time I climbed at the Wolgan, Iain and I had a bit on epic on "Excaliber", which rockets up the 100 m upper cliff of Old Baldy. We finished the climb after dark and stumbled back into camp at about 11:30 pm that evening. It took us most of the next day to retrieve gear we had left at various points. This sealed a perfect 3 out of 3 with respect to numbers of days E and I had climbed together at the Wolgan and returned to camp after dark. So it was somewhat surprising that E nominated (and Kate agreed) to returning to the Wolgan for a bit of camping and climbing with young Ollie in tow.

Most of us arrived on the Saturday morning. Camp was eventually established at the campsite across the river - 4WDs only now - but Tony kindly ferried the contents of the Ferrari across. In attendance - Tony, Cathy, Iain, Kate Ollie, Jeremy, Claire, Anita and I. On Saturday arvo Tony, Anita and I made our way up to the Coke Ovens for a spot of climbing. We had a great time on "Dan the Bulldog" (17) before heading back to camp. Remarkably, we even made it back to camp before true dark had set in (although the evening chill was certainly established), breaking the after-dark hoodoo. However, we arrived back at camp to discover that the Bogans From Hell had arrived and set up camp next door. How's the serentity? Drinking since they arrived in the early afternoon, the boozing, tree-felling, swearing at maximum volume, a stint of country music, and more boozing and swearing continued till about 4 am. You can imagine how relieved we were at signs of the camp being dismantled the next morning. Yippee! We finally had the place to ourselves. That afternoon E, Tony, Cathy, Anita and I headed back to the Coke Ovens (where we had stashed our climbing gear). Anita and I tackled "Marchiage" (20), whilst Tony made a valiant effort, including some improvised aiding, on the horrendous looking jamb crack that is "Sizzler" (19+2 = 21). E did well to get a mostly clean second under the belt. I don't think any of us will be lining up to jump on it again soon. We had an assorted play on "Deathbed Confessions" (13) and "dtbulldog" before heading back to camp, again before dark had set in.

Monday morning arrived. Jezz and Claire headed off early. Tony helped Anita and I back across the river, then we said our goodbyes to E and Kate. Tony, Cathy, Anita and I then plodded up and along the very pretty track to the Coal Mines cliffs, which I hadn't seen before. Ticked "Khe San" (20), which had the added surprise of a wasp nest encounter after the crux, followed by the mega classic "Monitor Madness" (18), which winds its way for 50 m up a curving arete. Even found a fossil protruding 1/2 way up. See, unless a devious God actually exists, all this sandstone nonsense used to lie under the ocean a long time ago. Once again, perfect weather for climbing on a winters day. Alas, all good things come to an end, rather abruptly too once the sun drops and the evening chill returns. Back to Sydney and the inanity of work mode. 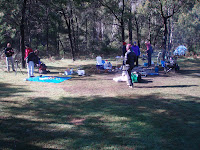 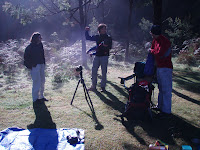 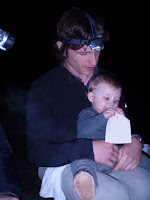 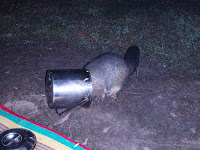 Possums doing the washing up 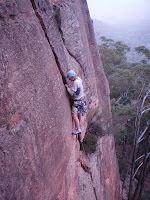 Tony at war with "Sizzler" 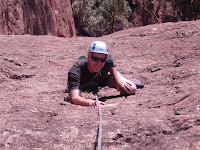 Tony high on the second pitch of "Dan the Bulldog" 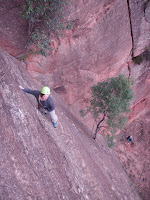 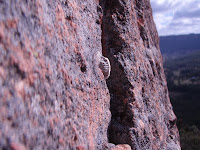 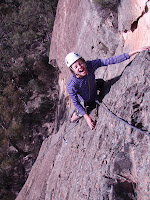 Anita giving a silurian growl - as you do - at the end of "Monitor Madness"
Posted by langles at Wednesday, May 13, 2009