I finally succumbed to much pestering from Anita to take her on the Oaks mtb trail from Woodord to Glenbrook. I had resisted previously as the Oaks used to be quite a technical track with a knack for either dislodging people on steep bouldery descents –known to break more than just fingers – or at the very least wear holes in posteriors. But the powers that be have, in recent times, taken it upon themselves to bludgeon all the technical character out of the Oaks trail. Apparently they want to make it capable of accommodating fire trucks, or some such nonsense. So, over the last few traverses it has become progressively bulldozed, to the point that it is now virtually unrecognizable. Makes a mockery of the NPWS’s insistence that riders stick to the track and respect the bush. Only one last nasty section remained – well even that is now kaput. Disappointing from the perspective of challenge and aesthetics, but now a veritable speedway and excellent for beginners. Our loop up the highway and back down the trail was not, however, without incident. About ½-way along the dirt Anita alerted me to the fact that her machine was not shifting so well. Closer inspection revealed that the chain on her bike was effectively broken, but somehow one outside link at the damaged section was holding it together. Years of always carrying a chainbreaker with me on trails was just about to pay off. With the damaged link removed we were soon on our way again – it would have been a bloody long walk! One hour 10 to the trail head, and 3 hr 20 min car to car.

Sunday was spent at the bluies, climbing at Barden’s lookout. Despite the heatwave forecast it turned out to be a perfect spring day. We ticked the usual range of 19s and 20s on the main wall before popping round the corner for some of the steeper routes in the shade. Even managed to get myself up a 22, although with the misconception that it was actually 21 (well led Owen!). It would be interesting to know if I would have snagged it knowing it was 22. So much of climbing is mind games, you see. 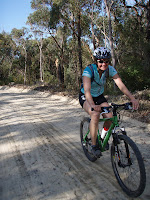 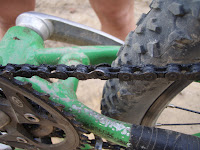 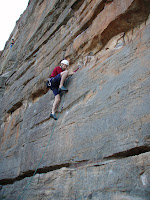 Owen muscles through the low crux on a 20 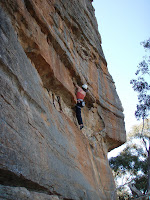 Anita at the crux section of another 20 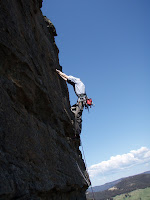 Dave Hemmings catching the rays as the sun swings over
Posted by langles at Monday, October 20, 2008